Home > Interviews > Used car dealer Jamie Caple on working under pressure, auctions and building a team in the pandemic 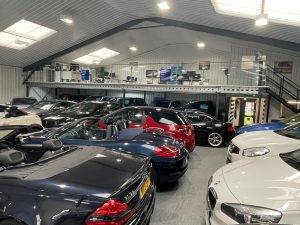 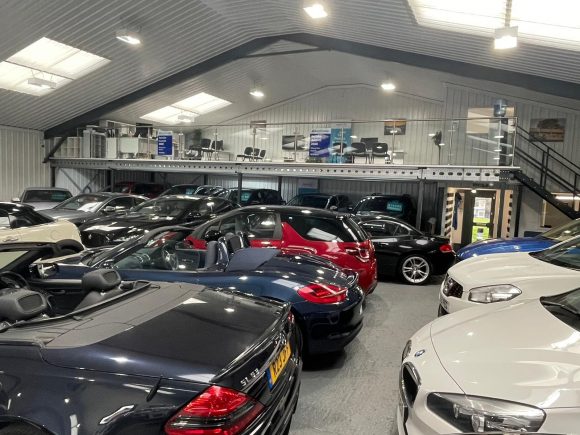 Used car dealer Jamie Caple on working under pressure, auctions and building a team in the pandemic

Many will recognise him as one of the major players in the famous Car Sales/Dealers Group Facebook group, often seen throughout the lockdown sharing his advice or a bit of humour from his home office.

Those with longer memories will know him for his days on television show Used Car Wars, going head to head with his now colleague Craig Vladimirovs before leaving his beloved business Caralot in 2016.

That’s why Caple admits he’s shied away from the limelight in recent years, but you’ll need to remember the über-larger-than-life car dealer donning a Mexican wrestling mask to appreciate how Jamie 2.0 is a bit of a wallflower in comparison.

Now the boss of Car Quay – which was voted Best Used Car Dealership (Over 100 Cars) at the 2020 Car Dealer Used Car Awards – he’s been desperate to get back out to the auctions since the pandemic struck.

He’d been planning to attend his first one in 10 months on January 5, but Boris had other ideas.

‘The last auction I went to was probably the first week of March. I was meant to go on the Tuesday just before lockdown but my partner had lung issues a few years ago, so still now she’s very nervous about Covid,’ he said. 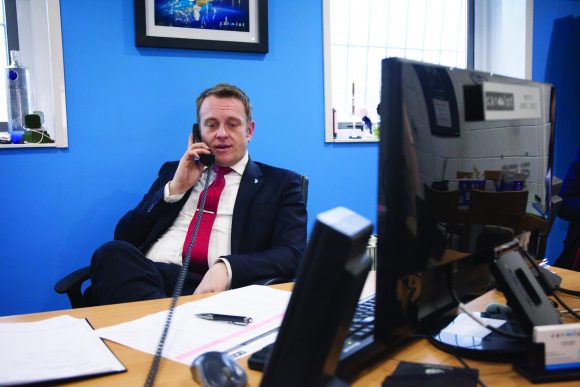 Jamie Caple in his Caralot days

He stayed at home from March 13, knowing he was doing the right thing but watching from a distance, itching to buy, as auction prices dropped.

‘Cars were really cheap but it was probably good I didn’t buy any because it meant I could relax in lockdown.

‘I wasn’t bouncing payments on people but sometimes I look back and wonder if I was too relaxed. I’m trying to buy some lumpier cars now because there’s money in the bank.

‘I operate at my best when I’m under severe pressure,’ he admitted. ‘It’s not a nice way to live my life but I think I get a kick out of it.

‘We built this business by operating at the limit every day. That sounds like we’re about to go pop but we’re not – we make sure that we’ve constantly got every penny in stock that we can make money off.’

Everything he wants is ‘going for diamonds’ at auction now, he said, but he’s pleased to be back in the dealership and says the pandemic has actually been a great thing for the business.

‘We’ve increased our stock and our team, so we should be doing better than we were before, and I think Covid and the rush from people to buy cars has helped us.’ 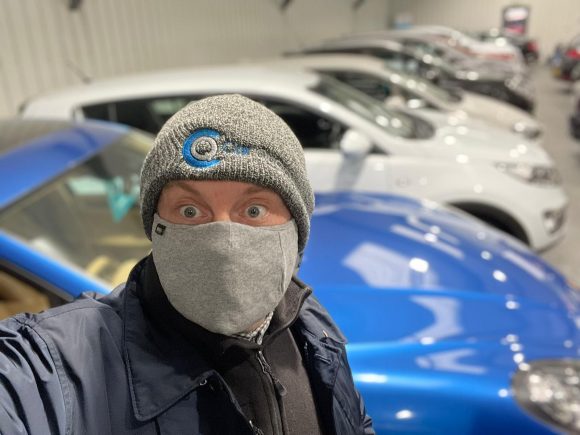 Previously known for wearing Mexican wrestling masks as a publicity gimmick, this is the only face covering that Jamie Caple dons these days…

This isn’t a time to be resting on your laurels though, he said.

Although he’s full of praise for the Derby-based Car Quay team and business partner Craig, he knows they can do better and wants to keep pushing them to do that.

‘We do the job well but I still believe we do the job 60 to maybe 75 per cent as well as we could. There’s a massive opportunity for self-improvement and for our team to get better.

‘I always say the job will get easier. It’s become a bit of a running joke here but I want to make the job easier.

‘I want my team to leave on time with everything done and that makes life less stressful.

‘I’ve got an amazing team here and they all do a brilliant job. The best thing is they want to be here.

‘I was saying the other day that when people pull a sickie it’s because they don’t want to come to work, and that doesn’t happen here.’

He continued: ‘Something great that has happened this year is how much better Craig has got.

‘I’m not saying he was doing anything wrong before, but in the last three or four months particularly he’s just levelled up.

‘To see that is brilliant and the result we’ve had this year is as much what he’s put into the business as me.

‘I’m Mr 100mph, but when I’m down who motivates the motivator? That’s what he does for me and it works.’ 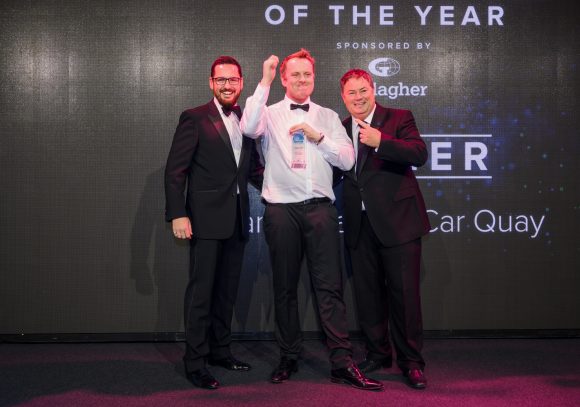 Jamie Caple collects his award for Dealers’ Dealer of the Year at the 2019 Used Car Awards from Leon Bosch, left, managing director of the automotive practice at category sponsor Gallagher, and event host Mike Brewer

At the 2019 Used Car Awards, Caple won the Dealers’ Dealer title for his support of fellow traders, while his used car dealership Car Quay picked up Best Newcomer.

This year, the Car Sales/Dealers Group decided to put on some awards for the businesses and people they felt had really made a difference in 2020, and Car Dealer Magazine was proud to be recognised.

The winners were chosen by the group admins, and Caple said that as they couldn’t all get together for the awards he decided to don a suit and present them from home on Facebook Live.

‘I’d heard a lot that Ben had lost a lot of staff. All charities I’ve heard have been kippered during Covid, because when situations like this happen people stop giving money to charity.

‘I thought it would be nice to give Ben a big shout-out because they’ve done a lot of good for people.

‘Then Auto Trader, I thought they deserved a massive shout-out for being the first to the party offering support for dealers.

‘For all of the negativity that they receive, categorically they stood up and said “We’re going to help” and all these other advertising companies followed suit.

‘Absolutely, we felt Car Dealer deserved some recognition. You guys got the motor trade to go back to work at the end of April. 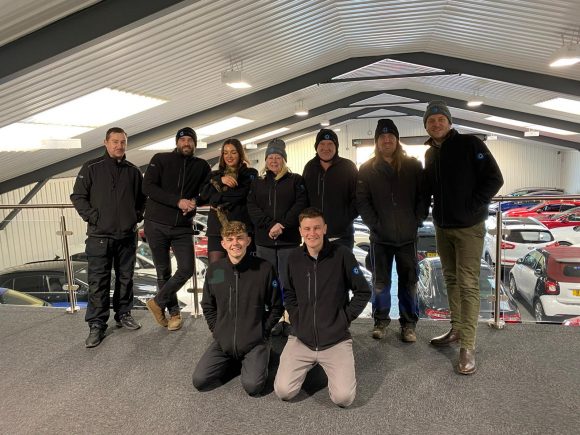 ‘We were all wondering what we can do, and it took an article from Car Dealer to clearly define whether we could deliver cars to customers legally and offer click-and-collect.

‘And that piece came out late in April and every dealer I know who was sitting at home said they were going back to work.’

The Car Sales/Dealers Group allows Caple to be himself, he said.

However, despite loving the way social media lets him interact with fellow car dealers, he’s not convinced this time around that it would make a difference to his business.

‘I don’t use my personal social media to talk trade other than on private groups, unless something really major has happened.

‘My old business went pop and I just wanted to hide away – and I did.

‘These groups allow me to be me on social media but in a protected way. Not that I’ve got anything to hide, but I just keep more of a low profile in my personal life. 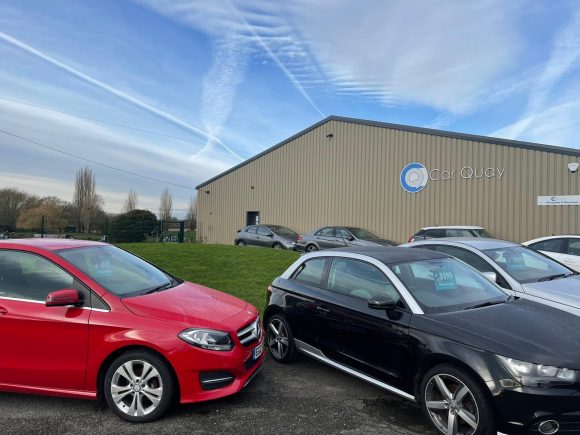 The exterior of the Car Quay dealership in Derby

‘They knew me as this larger-than-life Caralot character. Maybe we’re missing a trick but we’ve built this business up to where it is without social media.

‘I think things have changed though. We used to use social media to show off great reviews but now you go to our Auto Trader account and there are 400 five-star reviews right there.

These quieter times have given them the opportunity to get better, he said, adding that everything in the showroom was looking perfect as we spoke, and that staying on top of these things was their goal.

Looking further into 2021, he’s anticipating some changes will need to be made, while some of the changes that were made last year they’ll keep.

‘Customers are going to have to come back in. I like customers not coming into the showroom. That sounds horrible but I do,’ he said. 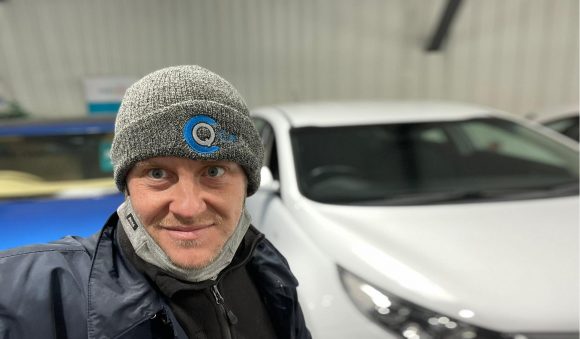 ‘I think there’s going to be a seismic shift, even after everyone’s had a vaccine. There aren’t going to be big groups of people hugging and high-fiving and shaking hands. I just don’t see it.

‘The business is just going to be a little bit more online-driven. Things are done at a distance, and we’re happy with that.’

The main goal, though, is to keep improving.

‘We’re getting better,’ Caple said. ‘We’re better than a year ago and this time next year we’ll be even better.’

This interview first appeared in Car Dealer issue 155. For more features like it plus lots more, view the latest edition by clicking below.