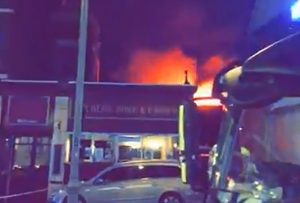 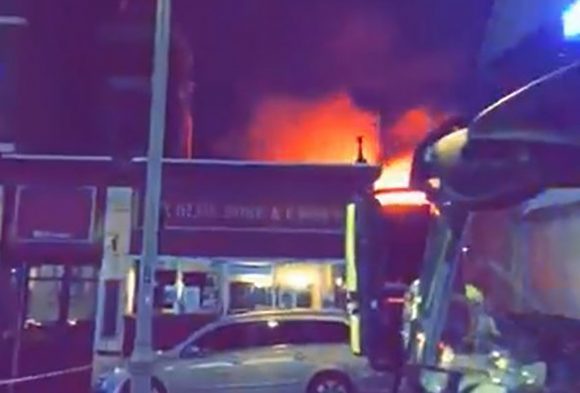 Investigation after dozens of firefighters called to workshop blaze

ABOUT 70 firefighters were sent to tackle a fire at a car workshop in north-east London last night.

The London Fire Brigade (LFB) said it was called to the blaze at MD Motors in Walthamstow shortly before 5pm yesterday.

Ten fire engines were sent to the scene on Hoe Street, where a two-floor car workshop and garages were alight.

Videos of the fire shared on social media showed flames and smoke rising into the sky.

Footage showed people watching the blaze near Ye Olde Rose and Crown pub as they stood behind a cordon.

Tweeting an update shortly before 8pm, the LFB said crews were still at the scene of the workshop fire where part of the ground floor, first floor and roof remained alight at that point.

Hoe Street was closed and motorists were being advised to avoid the area.

Station commander Jon Holt, who was at the scene, said: ‘Firefighters are working to bring the fire under control and are likely to be on scene into the evening.

‘Crews have worked hard to protect the surrounding shops and businesses and stop the fire spreading.’

At 8.20pm, the LFB tweeted that the fire had been brought under control and there had been no reports of injuries. The cause is under investigation.

Walthamstow MP Stella Creasy tweeted her thanks to the emergency service, as well as supporting affected businesses at the scene.