Car dealers have to sell to a variety of different types of customer – but the ones that can often get overlooked the most often are the youngest.

Easily dismissed as ‘time wasters’ who are merely on dealer forecourts for a ‘joy ride’ in the latest models, young drivers can often be missed sales due to preconceived misconceptions.

Young buyers, though, are often well funded by the ‘bank of mum and dad’ and looking for a good quality, reliable used car for their first set of wheels.

What, then, is the best way to deal with these younger buyers?

Car Dealer dispatched its youngest reporter Oliver Young, 19, to speak to car buyers and specialist dealers about the process.

‘I think dealers have to be less greedy and spend more time with young people, because the parents need as much reassurance as the kids,’ explained owner Elaine Pank.

‘You’ve really got to listen to the parents and explain things such as why they should have a black box, who should be a named driver, as well as try and help them in getting their insurance premiums down too.

‘If you can offer something more than the usual car buying process, they appreciate the personal service and having their questions answered.

‘And that’s what we do. We give advice and go out of our way to find out information if we don’t know it.’

Pank explained how her business was built on selling to younger, newer drivers and said it was key that parents trusted you.

‘If they do, you suddenly find that the brother/sister wants a car who’s perhaps 16. Then a year later they’ll come back,’ she added.

‘On top of that, you’ll find friends of friends then want cars and praise will come in from social media, saying “they’re really good with young people”.

‘Word of mouth is more important and now I’m finding advertising to be less important. Every sale you make is about repeat business and reputation.’

Insurance is certainly one of the critical deciding factors for many young drivers and premiums can sometimes outweigh the price of the car.

For first-time drivers not only is it about finding the right car at the right price, but also being able to insure it.

Alex Lake, an 18-year-old university student and 2011 Audi A1 owner, was forced to pay more for the insurance on his 1.6-diesel powered model, but saved money on the car which offset his decision.

He said: ‘Insurance is a huge part of buying a car as a young driver – the cost is very large at the moment.’ 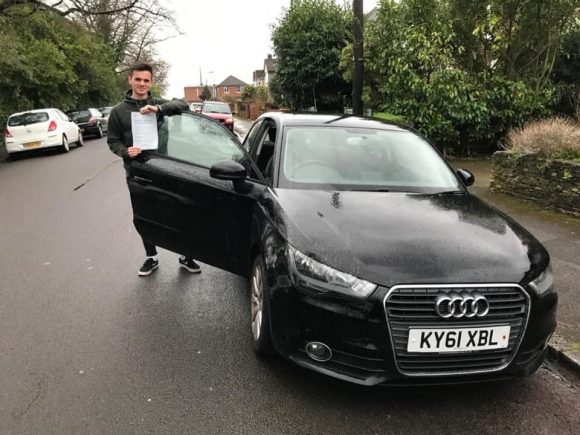 Alex Lake and his Audi A1

Insurance aside, finding the right car at a dealership that will take them seriously is another hurdle for younger buyers.

While price plays a major part for cash-strapped youngsters too.

Joe Sherliker, a 19-year-old university student, said: ‘Purely price is my number one priority at the moment. I’m a student with debts, so I just want a cheap car that will do the job.

‘I don’t want to be dropping a lot of money on something that’s going to break either. I want the car to last me a long time and not give up on me – I want to be able to trust it.’

That reliability point certainly plays an important part when young drivers weigh up which car to buy first.

Someone who also knows this all too well is 18-year-old university student Will Hockley whose first car had significant issues.

He said: ‘Based on my previous experience, my main concern when buying a car would be checking everything’s in working order – make sure there aren’t any faults.’

Car dealership Cavanfields in Tidworth is another used specialist that deals in affordable cars that attract younger buyers.

‘Something we carry out as a good practice is explaining to young people that they really need to be able to afford the car and know whether they can insure it before they buy it.’

Swaffield added that selling to young people is ‘not really that different’ from selling to older people, apart from some added explanation is often needed and he said all dealers should ‘take young buyers seriously’.

There have also been major shifts among young car buyers’ desires to buy their first car as costs escalate and new mobility solutions present themselves, while there’s one school of thought that young people now have less interest in owning a car completely.

One recent study by the University of West England revealed that just 37 per cent of 17- to 29-year-olds drive a car in a typical week – this had fallen from 46 per cent in 1999.

‘They’re saving money and not spending it on a car, rather finding more important things to spend money on.

‘I don’t think it’s got anything to do with the cost of a car or the cost of lessons, they’d just actually rather spend it elsewhere, perhaps choosing to get lifts or use public transport.’

Most car dealers we spoke to said what was most important when selling to young people was to take them seriously and not treat them any differently to other buyers – it’s worth remembering ‘they’ve all got to start somewhere’.

Used car dealers will soon have to get their heads around selling electric vehicles too and it won’t be long before they fall into the price brackets younger buyers can afford.

While currently some way out of the £2-3,000 price range of most young buyers, a 2018 AA survey found that half of UK young people would like to own an electric car.

All the young car buyers we spoke to for this feature agreed and said if an electric car had fallen within their first-car price bracket they would have considered one.

Audi A1 driving student Lake added: ‘I’d definitely like to own an electric car. I think it’s better for the environment and a lot of EVs offer good amounts of performance, which I enjoy.’

Dealer Pank thinks ‘electric cars will come forward, though they’re not priced accordingly for me to sell at the moment’ but understands they’ll soon be the future for her business too.

In fact, it won’t be long before young drivers not only have to consider price and whether they can afford the insurance – but they’ll need to pick between petrol, diesel and electric too. The options of youth, eh?