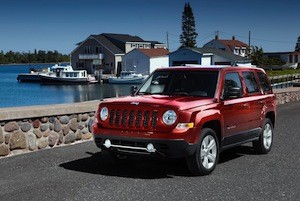 JEEP’S Patriot took first place in Glass’s league of fastest selling cars in November, taking an average of only 25.6 days to sell.

The Patriot is followed by Audi’s A1 in second place with an average figure of 31.4 days to sell, and the Hyundai ix35 in third position at 31.5 days.

As the demand for SUV’s continues to grow, this month’s top ten also included six crossover and SUV vehicles, highlighting the popularity of this segment.

Rupert Pontin, chief car editor at Glass’s, said: ‘Jeep has done exceptionally well this month – moving up from fifth position last month – a clear sign of the popularity of this car, and the fact that it is value for money and in short supply.

‘The number of 4×4 models at the top of the league is no surprise for this time of year. In fact they have largely remained popular throughout the entire year, despite a great summer and relatively mild weather conditions for early winter.’

Pontin adds: ‘On the whole, this month’s top ten is made up of cars from niche markets rather than run of the mill mainstream models from mass market sectors. It’s a sign of the times really, there is an increasing trend for buyers to want to be different and stand out, and they are choosing cars that help them to do this. It’s a pattern I think we will see more and more as we move into next year.’

Meanwhile, looking at the bottom of the league table, performance of both the Mercedes E-Class and SL-Class remain relatively low and Pontin believes this could be due to the fact that there are a lot of these cars in the market and even more being pushed into the new car sector.

According to Glass’s, the remainder of the ten slowest selling cars in November include a variety of models such as MG convertibles, the Volkswagen Golf and the Mitsubishi ASX.