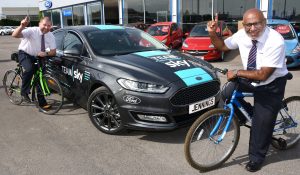 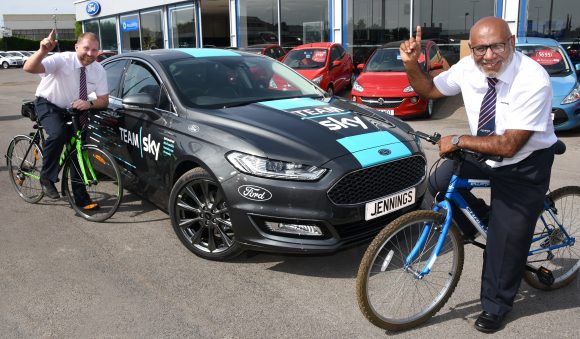 STAFF at Jennings Ford are putting the wheels in motion for a free cycling event in Teesside next month.

Keen cyclists across the area are being invited to take part in a Tour de Ford-led ride, which will start and finish at the motor dealer group’s Yarm Road-based dealership in Stockton-on-Tees.

On the day, cyclists will tackle two routes of approximately 30 and 50 miles, alongside a number of support vehicles, including two being supplied by Jennings Ford. The non-competitive rides will follow a route plotted on Strava, the social network for athletes.

Riaz said: ‘We’re delighted to be hosting the event, which is expected to attract scores of keen cyclists as well as members from local professional groups.’

Pictured above: Lee Spence, left, and Ray Riaz get set for the Tour de Ford at Jennings Ford