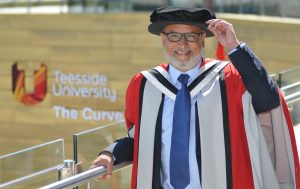 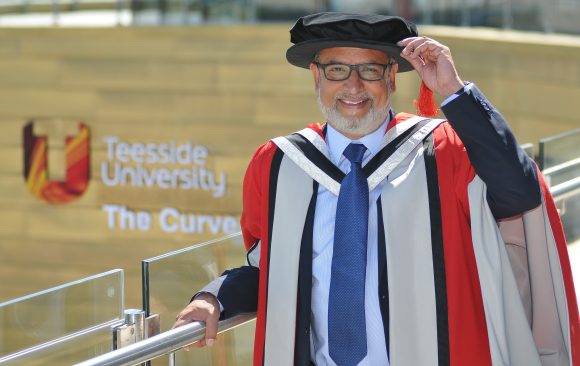 THE philanthropic boss of Jennings Motor Group has received an honorary doctorate from Teesside University.

Nas Khan was made an honorary doctor of business administration in recognition of his contribution to the economy and for his charity work.

He said: ‘I’m delighted to have been awarded the honorary degree from Teesside University. It was an absolute privilege attending and being part of the graduation ceremony.’

Despite not being able to speak a word of English after arriving in Britain from Pakistan at the age of 14, Khan went on to become sole proprietor and managing director of the motor group, which began life in 1911 when Septimus Jennings set up a bicycle and car sales business in Morpeth, Northumberland, employing six people.

Today, Khan is responsible for more than 500 members of staff at the company’s network in the north-east of England and West Yorkshire. It mainly consists of Ford, Kia, Mazda and Seat dealerships, but in recent years under his leadership it has diversified to include Harley-Davidson franchises, a property division and a Subway store.

Khan, who was awarded an OBE in the 2017 New Year’s Honours for services to the economy and charity, added: ‘We will continue to build on a name synonymous with quality and an excellent customer service.’

He has also received Ford Motor Company’s prestigious ‘Salute to Dealers’ global award and a local business award, in addition to an award from Human Appeal International for his commitment to charity.

In September 2010, Khan, who founded registered charity The Emaan Foundation, teamed up with Human Appeal International to rebuild an entire village for the people of Rahim Yar Khan, south of Punjab in Pakistan, following devastating floods.

The original target was to raise £120,000, with immediate fundraising contributing towards providing life-saving water purifiers in the aftermath of the disaster.

The new village, which has been named The Emaan Village, consists of 60 homes, a deep tube well providing clean water, and livestock, making it self-sufficient, as well as bio-gas plants providing electricity for various houses. Khan has since launched a second appeal to build a health centre.

In addition to his charitable work overseas, he is also heavily involved in supporting local charities and the community, including The Salvation Army, Teesside Hospice and the Great North Air Ambulance Service.

On SuperUnleaded.com: Here’s a police car you’ll want to ride in the back of