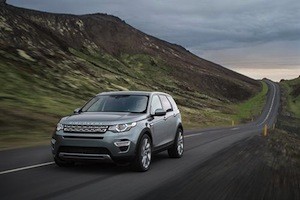 Replacing the Freelander, the brand new seven-seater Discovery Sport is the first of two further new Land Rovers arriving in the next few years – namely a new Discovery range-topper and a new Defender.

With deliveries commencing early next year, the Discovery Sport will be priced from £32,395 to £42,995 and will be available in a range from trims – from SE right up to HSE Lux.

Amazingly, however, the newcomer won’t be powered by JLR’s much-anticipated ‘Ingenium’ engines which will be found in the forthcoming Jaguar XE. Instead the Discovery Sport will use a 187bhp 2.2-litre SD4 engine as used in other JLR machinery.

It’ll be offered with a six-speed manual or JLR’s new nine-speed automatic and there will also be the choice of two- or four-wheel-drive.

However, later in 2015, there will be a more eco-friendly eD4 turbo diesel arriving promising CO2 emissions from 119g/km.

Inside the Disco Sport will have a ‘5+2 seating’ arrangement – something that’s been made possible thanks to an all-new multi-link rear axle freeing up space behind the second row of seats.

But the new car hasn’t forgotten the off-road heritage associated with the dark green Land Rover badge. The Discovery Sport will come with Land Rover’s clever Terrain Response system and will have approach, departure and breakover angles of 25, 31 and 21 degrees respectively.

Phil Popham, Jaguar Land Rover group marketing director, said: ‘Not only does Discovery Sport mark the introduction of the first new member of our expanding Discovery family, it also brings the versatility of 5+2 seating to the compact premium SUV market.

‘Discovery Sport’s versatility is a key differentiator. It is quite simply the most accomplished vehicle in its segment.’

Discovery Sport will be produced at Land Rover’s manufacturing facility at Halewood, Liverpool, and goes on sale in January 2015 in the UK alongside the existing seven-seat Land Rover Discovery.