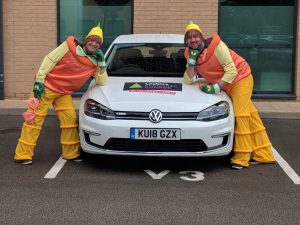 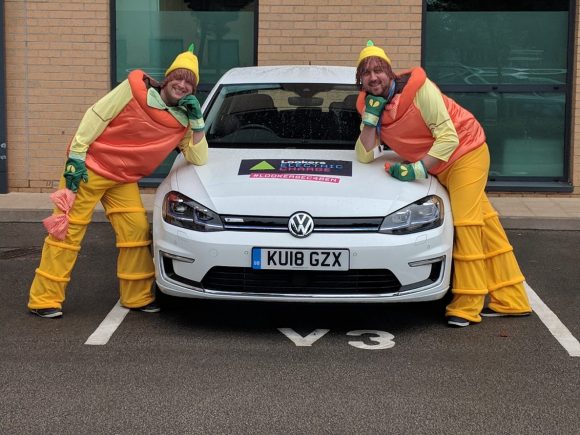 THE Lookers Electric Charge charity challenge has called into the retailer’s head office in Manchester, with everyone from the Flowerpot Men to the Teenage Mutant Ninja Turtles showing up to help raise money for industry charity Ben.

The carbon-neutral challenge, which is currently completing its north-west leg, will eventually see a relay of electric and hybrid vehicles travel 2,000 miles down the country to destinations including all 154 of the retailer’s franchised dealerships, where a range of fundraising events are being held.

These have included bake sales and raffles, while, on the stranger end of the spectrum, staff have driven their electric vehicles dressed as everything from Mario and Luigi to basketball players and cheerleaders, all while singing the challenge’s theme song Electric Avenue to camera.

Today #LOOKERSEC4BEN has been at our Manchester Head Office!

The day included a myriad of electric & green #fancydress, a classically British BBQ in the rain & face painting. We raised a whopping £2,000 (& counting) for @BenSupport4Auto.

Thank you to everyone involved! ⚡💰🚘 pic.twitter.com/QMgcgWv1ut

The group’s Manchester head office has also been a key stopping point during the relay’s drive through the North West and saw staff host a surreal barbecue that saw Bill and Ben the Flowerpot Men, the Ninja Turtles and the Powerpuff Girls in attendance.

A fund-raising penalty shoot-out capped the day, which managed to raise over £2,000 towards the challenge’s overall total.

The electric car relay will take in all 25 of Lookers’ North-West dealerships before making its way to its sites in Staffordshire.

Lookers CEO Andy Bruce said: ‘We’re so excited that the Lookers Electric Charge has come to the North West, as well as our group head office here in Manchester. We’ve already seen a number of fantastic fundraising events held at our dealerships in Ireland, Scotland, the North East and Yorkshire and I’ve no doubt that the teams in the North-West will be more than up for the challenge.’

The initiative will include more than 180 stops in total, including visits to the Electrification Centre of Excellence at the Jaguar Visitor Centre in Castle Bromwich and Ford’s iconic factory in Dagenham.

While in London, the Electric Charge will also hold the ultimate showdown between electric car and bike in a first-to-the-finish race across the city.

Zara Ross, chief executive at Ben, said: ‘We have been following the Lookers Electric Charge with great interest and have been amazed by the effort being made by staff at its dealerships all around the country. They’ve really grabbed this challenge with both hands and we can’t wait to see what they come up with next.’

MORE: Lookers’ David is named Motability specialist of the year

On WorkshopMagazine.co.uk: SMPE to join line-up of exhibitors at Automechanika Frankfurt