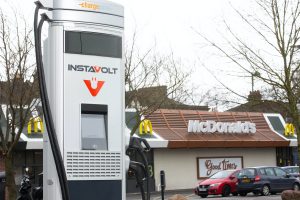 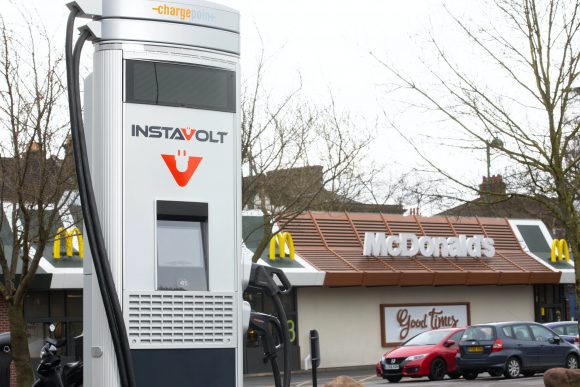 Drivers will be able to order a Big Mac, fries and some electricity for their cars as McDonald’s drive-thrus around the UK are set to get charging points.

In a deal that will significantly boost the number of charging points around the UK, McDonald’s has said it will install hundreds of units at its UK sites.

The deal is a partnership with InstaVolt and could see 1,300 new chargers installed. The firm’s units can provide 80 per cent of charge in under 20 minutes.

McDonald’s UK and Ireland CEO Paul Pomroy said: ‘Appetite for electric vehicles, which will be a central part of the UK’s efforts to build back greener post Covid-19, is growing.

‘This partnership and ambition takes advantage of our scale, and is a real step forward for those already driving electric vehicles, as well as people considering making the switch.

‘With over 1,300 restaurants our ambition would mean you would never be far from a charging point.

‘Our ultimate ambition is to have more EV charging points on our premises than any other company in the UK and Ireland.’

Thousands of electric vehicle charging points will be needed to cover the UK if the government is to hit its target to ban all new petrol and diesel cars from 2035.

In research commissioned by the fast food chain, more than half of people who do not own an electric car said that a lack of convenient charging points was a barrier to them switching.

Two thirds said they would reconsider if there was better coverage.

The policy will also help McDonald’s own staff, who are offered electric or hybrid vehicles if they are eligible for company cars.

Poppy Welch, head of Go Ultra Low, the joint government and industry campaign to promote the uptake of electric vehicles, said: ‘The UK is home to an ever-expanding network of charge points with more than 300 public charge point connectors installed in the last 30 days alone.

‘The availability of charge points across the country, at locations like McDonald’s, will show people how convenient and easy it is to own and run an electric vehicle.

‘This significant commitment is fantastic news for existing and future electric vehicle owners across the UK.’