Mercedes-Benz has given its CLS four-door coupe a mid-life makeover, tweaking the looks and adding a cleaner diesel engine.

This latest facelift builds on a range of updates added last year which brought in some new driver assistance technologies and infotainment system updates. This time around though the changes are more sweeping.

The bumpers have been revised as has the front grille, with entry-level Avantgarde models getting a new front apron with two louvres at either side, while a front splitter finished in silver chrome brightens the look of the car.

Around the back, there’s a black diffuser-style insert while two 19-inch alloy wheel designs are available too.

AMG Line cars get an AMG-specific front apron, air intakes with vertical bars and sill trim for the side. There’s also an AMG spoiler lip for the boot, while two new colours can be selected for the 20-inch alloy wheels – tremolite grey or high-gloss black. 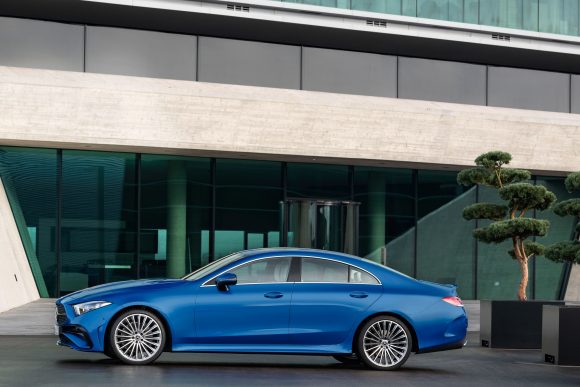 Inside, there are two new trim finishes now available – open-pore walnut and high-gloss grey wood – while extra seat upholstery choices have been added too.

The powerful CLS 53 also benefits from an update, with redesigned bumpers and polished aluminium surrounds for the windscreen frames. There’s also the option of adding a Night Package, which incorporates a range of gloss black touches throughout the car. A Carbon Package adds, as the name suggests, a variety of carbon-fibre accents.

A new Limited Edition – of which just 300 units will be produced – has also been announced, which adds racing stripes and a variety of high-gloss black exterior elements.

The new CLS is expected to go on sale this summer, with prices announced closer to that time.