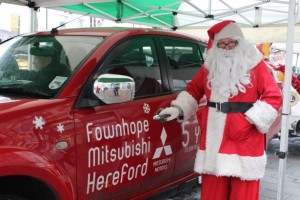 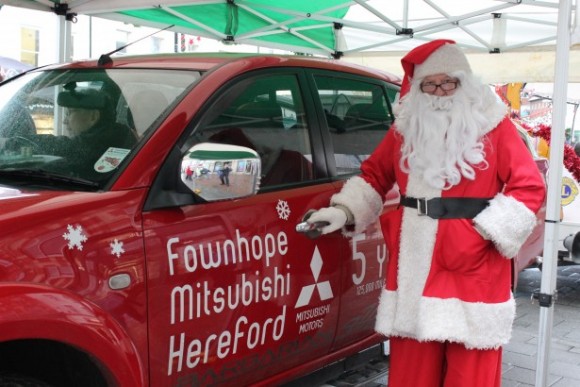 A MITSUBISHI dealer has come to the aid of Father Christmas by loaning him an L200 pick-up.

Fownhope Mitsubishi in Hereford is supporting the fund-raising efforts of the local Lions Club this Christmas – and by loaning them an L200, the dealership is allowing Father Christmas to be transported around the city.

Santa and his helpers tour the local area every year to raise money for a variety of charities and this year are focusing their efforts on the local air ambulance.

Santa is also stationed in the city centre during the daytime, where he’s been busy chatting to passers-by and greeting children on his brightly-lit sleigh. Collectors with buckets help the fund-raising effort, giving passers-by the chance to part with a few coins as they tackle their Christmas shopping.

Lions Club member David Hartland, who’s in charge of organising the festive fund-raiser, said: ‘We’re very grateful to Fownhope Mitsubishi for their support. The L200 is extremely eye-catching and helps attract people of all ages to Santa… and of course that all helps us raise money for the causes we are supporting.’

Sam Peachey, director of Fownhope Mitsubishi in Kings Acre Road, Hereford, said: ‘We’re more than happy to support the good work of Hereford Lions Club. The L200 in its red and white livery, complete with snowflakes, looks great and is the perfect vehicle to tow Santa around the city.

‘It goes without saying that we’re more than happy to supply the car to Santa – and we also provide the fuel. As well as raising valuable funds for the air ambulance and other charities, the whole operation spreads a great deal of festive cheer around Hereford.’