Home > News > Mitsubishi dealer profitability at its highest level since 2006 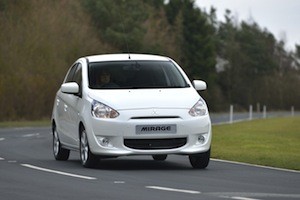 Mitsubishi dealer profitability at its highest level since 2006

MITSUBISHI Motors UK has revealed its dealer profitability is at its highest level since 2006.

September’s new car registration figures show that the brand’s year-to-date sales figures were up 49.61 per cent thanks to new dealer appointments and model introductions.

Mitsubishi’s dealer network has increased by 10 per cent in the last six months and the brand is set to increase its network by a further 25 new dealers in the next two years.

Sales of Mitsubishi’s new city car, the Mirage, and its seven-seat SUV Outlander have ‘exceeded sales targets’, says the firm. In fact, all models across the range have seen ‘significant’ interest while Mitsubishi’s L200 continues to be retail pick-up market leader. The model is also up on last year with a market share of 26.0 per cent in September and 23.4 per cent year-to-date.

The company has also expanded its franchising team with the appointment of John Mason, who will be responsible for recruiting dealers in the north, while dealer franchising manager, Alan Rooke, manages the south.

Mitsubishi Motors UK managing director, Lance Bradley, said: ‘2013 has been an exceptionally good year for us and sales are currently up more than 49 per cent with thirty of our dealers doing more than double the volume than they did last year.

‘It makes it so much easier to appoint new dealers when we can say that Mitsubishi is the fastest growing car brand in the UK and return on sales is the highest on record.’