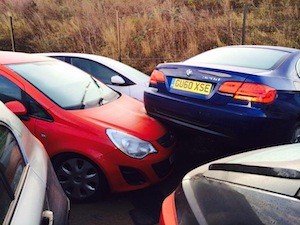 A CAR supermarket has been forced to write off more than 700 cars after a flood caused extensive damage to its premises.

Motor Depot’s six-acre site on Livingstone Road, Hessle, was one of the biggest casualties of Thursday’s freak tidal surge, at one point becoming submerged in more than three feet of water.

As a result of the damage, the premises are now closed for the ‘foreseeable future’ and the company anticipates its entire stock-list of over 700 vehicles to be formally ‘written off’ by insurers this week.

‘It’s pretty devastating,’ said Butterley. ‘We’re still taking stock of it all. No matter how much insurance you have, it’s just one of those situations nothing can prepare you for.

‘Obviously, our immediate concern is with existing customers who may have had a new car on order or a vehicle left in our garage. We have a designated help-line up and running 01482 384998 which is open 10:00-15:00, and we would urge customers to follow our company website for updates.’

‘Further down the track, we will be utilising our alternative facilities on Clarence Street to meet servicing and warranty obligations to new and existing customers.

‘It’s clearly a very challenging time for everyone right now, but we have no option but to take it on the chin. All of our staff are really pulling together on this and I am sure we will be fully operational at Hessle in the not too distant future.’

Despite last week’s devastating setback, Butterley believes Motor Depot has a lot to be positive about heading into 2014.

‘We are expecting to move into new premises at Scunthorpe as part of a major expansion programme within the next few weeks, and it is our intention to re-launch at Hessle bigger and better than before, complete with a new, state-of-the-art facility.’

‘We are already in the process of replenishing our entire stock-list with a completely fresh batch of vehicles and I am sure we will be looking to kick-start that with some hugely enticing deals. I would urge anyone thinking of changing their car right now to wait and see what deals we can offer in the new year.’

On the current situation, Butterley praised the patience and understanding of present customers whilst also paying tribute to those who had expressed messages of support through social media.

‘Everybody has been so supportive. We have been inundated with goodwill messages on our Facebook and Twitter sites and that is something we really do appreciate. At the same time, I would like to go on record and thank our current customers for their patience and understanding to events which were beyond our control.’