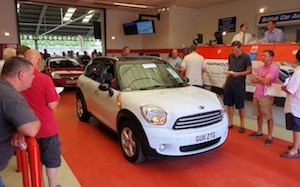 THE average value of used cars sold at auction across the board increased by four per cent in July.

According to the National Association of Motor Auctions’ (NAMA) monthly market report the average value increased from £5,381 to £5,595 – a 14 per cent increase versus July 2013 and reflective of the higher proportion of younger cars now in the mix.

Falling volumes yet steady buyer interest contributed to the average price increase in the PX and budget profile segments, although rising age and mileage amongst fleet profile cars resulted in a net average decline in values achieved. The original cost new percentage for all profiles remains substantially below the value attained during July 2013.

Paul Hill, NAMA chairman, said: ‘Retail activity during July was an interesting mix for both franchised and non-franchised dealers alike. The early part of the month seemed to be quite active with plenty of calls and good footfall.

‘However, this changed around the middle of the month and interest waned with dealers citing the improvement in the weather, the Commonwealth Games and the start of the school summer holidays.

‘The beginning of August saw a change in fortunes once more and retail activity improved notably for the trade as a whole. This looks set to continue through to the end of the month and into the first weeks of September. August is traditionally a month of limited defleet activity as buyers wait for the new plate in September. As such, this creates a challenging environment for the trade buyer and an opportunity for the trade vendors.  Trade buyers have to fill empty spaces on the forecourt and as such will buy just about anything they can to attract buyers.

‘In summary a reasonably good month is expected from a retail perspective, although finding the stock to feed the retail demand will be a little more difficult than usual. Naturally this means that trade vendors will also benefit from the opportunity to sell the lower quality and repeatedly unsold stock that has been clogging the trade for some months.’