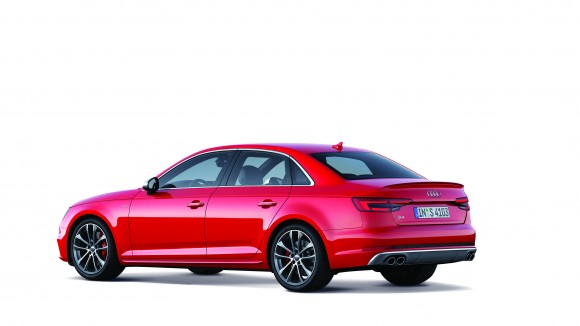 IT’S 50 years since Audi came to the UK. Back then, the German carmaker sold 32 cars in a year. Since then this has grown to two million.

Between January and August this year, Audi sold 104,000 cars in the UK alone, and that’s not including September registrations.

For Audi, business is booming, which is strengthened further by the unveiling of the performance flagship model of the best-selling A4 – the S4 (pictured).

Producing 349bhp, it boasts a 0-62mph time of 4.7 seconds, which means figures that could easily be associated with an RS model are now being delivered by the all-new Audi S4 and S4 Avant.

Hitting dealerships in 2016, the new performance saloon combines the lightweight design and re-engineered platform of the latest A4 with a completely new turbocharged V6 TFSI engine, which replaces the A4 and S4 predecessors’ supercharged unit.

‘We have more than 20 years of expertise in developing our sporty S models,’ said Audi UK brand director Andre Konsbruck. ‘Our formula for success has been a combination of outstanding quattro performance and state-of-the-art drive train and suspension technology.

‘The new S4 and S4 Avant models continue this tradition – they are the most technologically advanced vehicles in their segments.’

Looking forward, Audi appears to be placing its focus on the development of electric drivetrain technology with the e-tron quattro concept.

‘The e-tron quattro SUV is on its way and will arrive in production form in three years time,’ said Konsbruck. ‘Our expertise in the development of hybrid and electric vehicles goes from strength-to-strength and you will see more e-tron models in the near future.

‘We don’t believe this is the end of the internal combustion engine but e-tron is the future.

‘As alternative fuel-powered vehicles become more popular, our model line-up offers something for everyone.’

MORE: ‘Q30 will help Infiniti reach all corners of the globe’