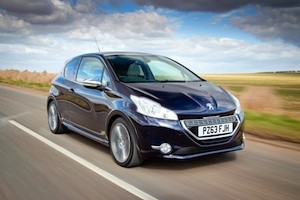 Mike Hawes, SMMT chief executive, said: ‘Improving economic conditions have helped propel the UK new car market to a strong first half-year performance, with registrations up 10.6 per cent on the same period in 2013.

‘Key to attracting consumers is the ever-improving efficiency of new cars, an important factor that is highlighted by the 51.3 per cent increase in alternatively-fuelled vehicle registrations so far this year.’

He added: ‘The overall market has risen faster than we were expecting but, after a bumper March, growth is showing signs of stabilising around our forecast level.’

With more than 11,200 units registered, the Ford Fiesta lead the sales charts in June followed by the  Vauxhall Corsa with 7,961 and the Ford Focus with 7,399.

The Blue Oval’s supermini also continues to lead the year-to-date figures with 70,153 units – more than 25,000 than the second placed car the Ford Focus.

Richard Lowe, head of retail & wholesale at Barclays, said: ‘The market has been firing on all cylinders for over two years, although the rate of growth has recently slowed and anecdotal evidence suggests that this will continue in the months ahead. This may be necessary to help stabilise the market, although manufacturers will no doubt continue to offer alluring finance deals to try to tempt consumers and maintain the UK market at near record levels.’