Home > News > New car sales drop to nine-year low for October as they fall by 1.6 per cent

New car sales drop to nine-year low for October as they fall by 1.6 per cent

New car sales dropped by 1.6 per cent in October, the SMMT reported this morning (Nov 5), with Wales’s ‘firebreak’ lockdown having a major effect.

A total of 140,945 cars were registered, which was a nine-year low for the sector.

The weakest October figure since 2011 was also 10.1 per cent lower than the average recorded over the last decade.

The SMMT said that the arrival of new models and ongoing financial incentives helped to sustain UK demand to begin with in October.

However, Wales’s two-week ‘firebreak’ lockdown brought in on October 23 contributed to the nation recording 25.5 per cent fewer registrations by the end of the month. That in turn accounted for more than half of the overall UK decline.

Mike Hawes, SMMT chief executive,  said: ‘When showrooms shut, demand drops, so there is a real danger that with England today entering a second lockdown, both dealers and manufacturers could face temporary closure.

What is not in doubt, however, is that the entire industry now faces an even tougher end to the year as businesses desperately try to manage resources, stock, production and cashflow in the penultimate month before the inevitable upheaval of Brexit. 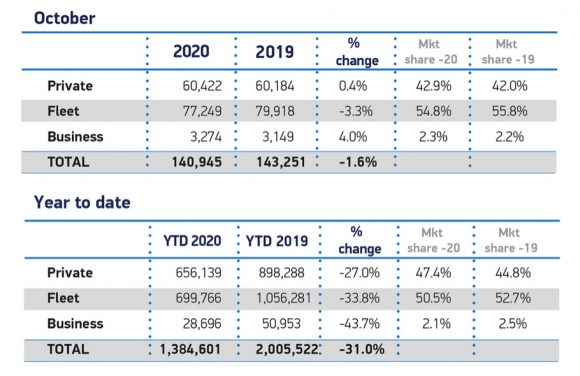 ‘Keeping showrooms open – some of the most Covid-secure retail environments around – would help cushion the blow but, more than ever, we need a tariff-free deal with the EU to provide some much-needed respite for an industry that is resilient but massively challenged.’

Subdued activity from businesses drove much of the month’s drop, with around 2,500 fewer vehicles joining larger fleets than in October 2019, while private registrations saw a small increase of 0.4 per cent.

The SMMT said that as of mid-October the industry was expecting to register some 1.66m new cars in 2020.

However, with showrooms in England having to shut because of a second lockdown for England, the market forecast had been downgraded further to 1.56m units.

ASE Global chairman Mike Jones joined James Batchelor for a special edition of Car Dealer Live to discuss the figures as they were announced. You can watch the broadcast in the video at the top of this page.