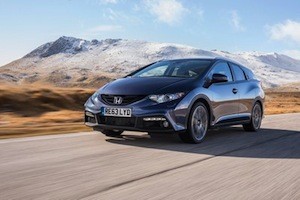 HONDA’s new Tourer estate car will account for around a quarter of all Civic sales in the UK when it goes on sale in the new year.

In line with the standard hatchback, sales of the new Tourer are expected to be split by 70 per cent retail and 30 per cent fleet, with the 1.6-litre diesel version particularly attractive to companies.

The Civic model is one of the brand’s most important models, which sees Honda sell around 20,000 units per year in the UK – the majority of which are produced at the company’s Swindon factory.

Dealers will start taking orders of the new model in December with prices starting at £20,260 for the 1.8-litre petrol iVTEC and £30,000 for the top of the range model with enhanced safety and driver assistance packages.

The Tourer will be the first estate in the Civic range since its predecessor in 1998 and 2001, before it was dropped from the line-up due to customers moving towards SUV and MPV-styled vehicles.

Honda says it sees new opportunities growing in this segment as estate car sales once again begin to increase across Europe.

Civic project leader Adrian Killham, said: ‘The C-sector is important for us because it is still growing strongly and in terms of the estate, there is a lot of down-sizing from the D-segment going on.

‘The Tourer has been completely developed and tested in Europe. The front end is carried over from the hatchback but everything from the B-pillar back is new.

‘The wheelbase remains the same with an increased rear overhang and by extending the roofline we have also overcome the criticism we received with the hatchback over rear headroom.’

He added: ‘The rear is where all the work is being done and where the additional weight will be. There was no need for it at the front which also means we have been able to keep weight and price down.’