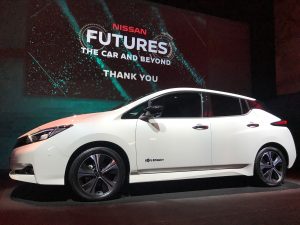 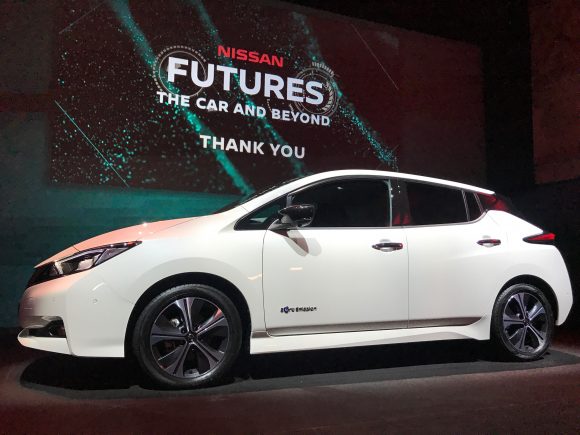 THE first edition of the new Nissan Leaf will go on sale today and cost £26,490, as revealed at its first appearance in Europe.

Called the Leaf 2.Zero, the limited-edition version of the all-electric hatchback is kitted out with semi-autonomous functions including the ability to park itself.

The price tag of £26,490 is specifically for this model, including the government grant, but Nissan will no longer be renting out batteries on top of this cost.

It was unveiled at the Nissan Futures 3.0 event in Oslo, the first time the EV or its ProPilot functionality has made an appearance in Europe. It debuted alongside the new longer range e-NV200 van and home charging systems, all of which Nissan believes will get more drivers behind the wheel of an electric vehicle.

ProPilot, the name Nissan gives its autonomous system, will enable lane-keep assist, intelligent cruise control and traffic jam assist all at the push of a button. This will be an optional extra, fitted as standard on top-spec models.

New #NissanLeaf makes its debut in Europe at #NissanFutures in Oslo. What do you think compared to the old gen? pic.twitter.com/R1W5kbpLxm

Alex Smith, Nissan’s UK managing director, said: ‘One thing we’ve seen with existing Leaf customers is that once they are in an EV they stay in an EV. We have a lot of customers who bought the 24kWh of the current car and as soon as there was a 30kWh version they upgraded and I am already seeing the letters from customers of current 30kWh Leafs who are wanting the details as soon as possible. We’ve got that hard-core group of people who have accepted the technology and are just wanting to upgrade and upgrade, which is something you see in other consumer segments.

‘I think we will have an ever increasing group of people who, when we do a good job in the dealer network explaining the benefits of an EV and explaining how an EV can be a viable option of car for many customers, then I think people will drive it, appreciate it and realise what a pleasant experience it is.’

He added: ‘It’s not intimidatingly futuristic and I think that’s really important with an EV, particularly this EV. It’s the successor to the UK’s best-selling battery electric vehicle, so it’s really important that this is presented as a fantastic car but as a normal car. It’s a battery-electric vehicle that can be considered against any other cars in its class in terms of its driving experience and range.’

Nissan Leaf product specialist for Europe Francesco Giacalone told the Car Dealer: ‘We have big expectations and the car represents a massive improvement for all technology in the car and from a design perspective, so we’re now moving to a more mainstream design.

‘I think some customers for the old Leaf were more reluctant to take the car because of some polarising in the design. They will not have these objections any more, therefore we can grow much faster and appeal to a broader population than we have done so far.’

The Nissan Leaf also gets the addition of the ‘e-Pedal’ for the first time. This uses regenerative braking when the accelerator is released, meaning most drivers will rarely use the brake pedal and will cover short journeys using minimal battery power.

The hatchback will now be able to cover 235 miles on one charge, so most owners won’t need to charge more than once a week. The new version of the all-electric e-NV200 has increased range by 60 per cent, meaning it can cover 174 miles on one charge.

On SuperUnleaded.com: Angered by bad parking? It could be wasting thousands of spaces