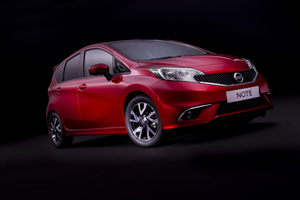 NISSAN has revealed its new mini-MPV, the Note.

Set to be built in the firm’s Sunderland plant, the new Note is said to offer ‘innovative first-in-segment features’, including Nissan’s ‘Around View’ monitor system similar to that used in the Qashqai 360.

Additionally, there are blind spot and lane departure warning systems, along with a ‘Moving Object Detection’ system that’s said to alert drivers to things like children walking behind the car.

There’s also a rear-view camera which washes and blow-drys its self to prevent dirt building up over the lens, and Nissan have completely refreshed their ‘Connect’ navigation system too.

Now with features including ‘Send to Car’, where destinations can be sent from smart phones to the car’s navigation system, and Google ‘Points of Interest, where the driver can search for the nearest fuel prices and grab flight and weather information.

The Note also gets a selection of new engines – two 1.2-litre petrols and a ‘newly engineered’ 1.5-litre diesel. The petrol engines are both three-cylinder turbocharged units outputting either 78bhp or 96bhp, with the latter managing CO2 emissions of just 99g/km and combined MPG of 65.7. The diesel meanwhile generates 88bhp, emits just 95g/km, and offers fuel economy of 78.5mpg combined.

Chief marketing manager for Nissan in Europe, Geraldine Ingham, said: ‘New Note fulfils a really important role in our line-up, combining really smart design with technology that has never been offered in the B-segment before. We’ve used design and engineering innovation to make premium technologies accessible and affordable’

Prices and further specifications of the Note will be revealed nearer to its on-sale date, set to be around autumn 2013.