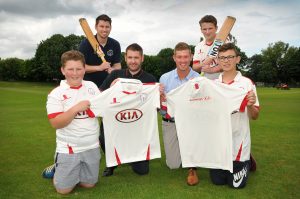 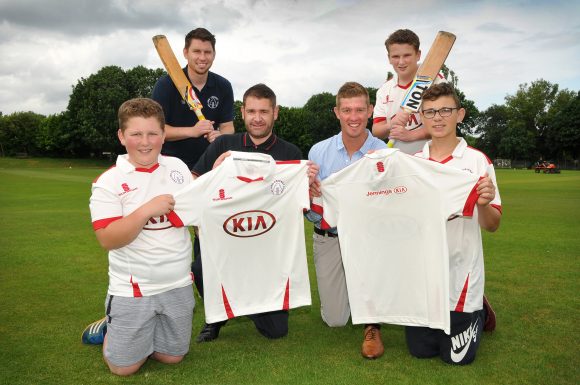 A CRICKET club’s junior section has been bowled over by a sponsorship deal with Jennings Kia.

Gateshead-based Felling Cricket Club was given a set of shirts for its under-18s team as part of Kia’s Gift of Kit initiative, which aims to support grassroots cricket teams across the UK.

Durham and England cricketer Keaton Jennings, who coincidentally shares his surname with the dealership group, took time out of his busy schedule to support the new partnership by making a guest appearance and helping franchise manager David Phillips with the official presentation of the shirts.

Phillips said: ‘We are delighted to be able to support one of the north-east’s leading cricket clubs by providing the branded shirts to the team of up-and-coming cricket players – grassroots cricket is the heart of the game.

‘It was also great that professional batsman Keaton Jennings was able to support the presentation event and be part of the celebration.’

Simon Wood, committee member at Felling Cricket Club, which was established in 1919 said: ‘We would like to thank Jennings Kia for their generous support, as well as Keaton Jennings for dedicating his free time for the presentation.

‘We have high hopes for the team, who are all absolutely thrilled with the shirts that will be used next season.’

In April, the 25-year-old professional batsman, who hails from Johannesburg but whose mother was born in Sunderland, took delivery of a new Kia Sportage 1.6 GDi Level 1 model as part of a 12-month sponsorship deal with Jennings Kia Washington.

On SuperUnleaded.com: Can you guess when these driving games were released?