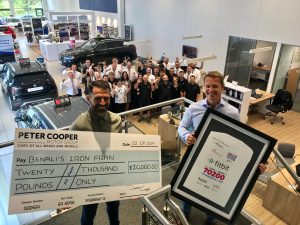 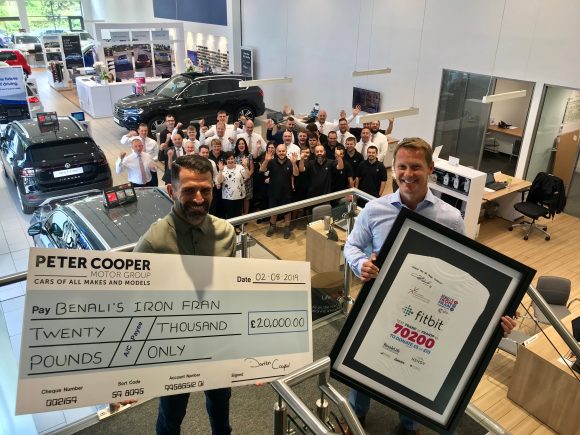 SOUTHAMPTON FC star Francis Benali’s charity fund has been given a £20,000 boost courtesy of the Peter Cooper Motor Group.

The fund, in aid of Cancer Research UK, broke the £1m mark after former full back Benali’s ‘Iron Fran’ triathlon in May, and after two months of fundraising by the group, managing director Darren Cooper handed over a £20,000 cheque to Benali – affectionately known as Franny – at its Hedge End dealership last week to swell the figure further.

The company raised the money from a number of initiatives, such as its annual golf event at the Downs course at Goodwood. Other exploits included Peter Cooper staff completing an Ironman challenge at each of its six sites. It was achieved via exercise bikes, treadmills and rowing machines to replicate the swimming in the showrooms for one day during Benali’s efforts. Customer and staff donations were made as each site individually covered a marathon, cycled 112 miles and rowed a minimum of 20 miles.

Cooper, pictured right, who completed a marathon on the treadmill despite little training, said: ‘We are all delighted that we could raise so much money for Franny’s ‘‘Iron Fran’’ challenge.

‘Everyone at the Peter Cooper Motor Group, like many thousands of people around the country, were very moved by seeing the suffering that Franny was putting himself through during his latest Ironman challenge. It gave us all the motivation to do our bit and raise some money for a charity that is close to us all.

‘I hadn’t planned to run for more than an hour during the challenge. However, I didn’t feel tired enough to stop so kept going. Three hours 40 minutes later, I’d done 26.2 miles on the treadmill and raised a few more pounds to our total. It made me think I should run in the showroom a little more often!’

Benali, 50, left, said: ‘I’d like to thank Darren, his golf friends and all the Peter Cooper staff and customers for their amazing efforts. This will be added to the total, which now stands at over £1m.

‘To hit the £1m mark was amazing and a complete team effort. It’s what I set out to raise throughout my three challenges and I’m very proud to have achieved it. Thanks of course have to go out as well to all those special people that helped me along the way.’