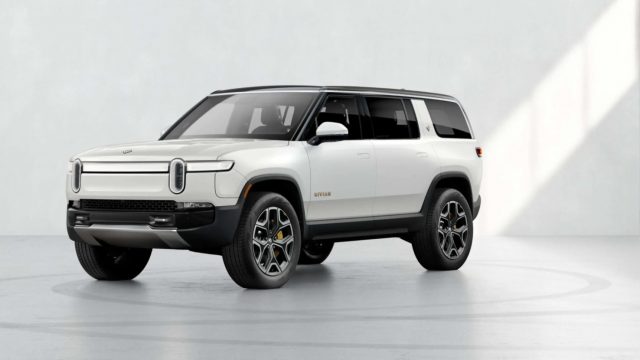 The car maker – which is expected to only deliver 1,200 cars this year – saw its share price rise 15.2 per cent in trading yesterday.

This followed a gain of nearly a third on its first day on the Nasdaq giving the electric car firm a market value of $152bn.

That means it has now overtaken Volkswagen Group – which owns Audi, Porsche, Lamborghini, Skoda and Seat – which has a market cap of $140bn.

Investors in Rivian include Ford and Amazon which have made billions from the listing.

Ford itself has a market cap of $79bn.

Rivian has two vehicles in its range – the R1T, the pick-up which starred in the Long Way Up adventure motorbike series, and the R1S, an SUV based on the same platform.

They will have ranges of up to 420 miles and will cost around £70k when they come to the UK.

Deliveries in the US will be starting soon with the order book for its first edition R1S full.

A European launch is expected at some time in 2022.

Investors believe Rivian will become a rival to Tesla which has seen its market cap top $1tn.

Meanwhile, Tesla is being sued by JPMorgan Chase, reports The Times, for breaching a contract the two companies agreed to warrants Tesla sold to the bank.

The law suit for $162m centres around a tweet boss Elon Musk posted in 2018 threatening to take the company private.

The tweet caused market volatility. The bank says Tesla has since defaulted on its contract to hand over shares or cash and has launched legal action to seek amends.

Tesla did not respond to a request for comment from the newspaper.