Home > News > What is Rivian? What does it build and is the brand coming to the UK? Long Way Up support truck maker in detail

Rivian. It’s a name you might have heard a little about but aren’t quite sure what is it or what it offers.

You might even have seen Rivian making an appearance on Long Way Up – the latest Ewan McGregor and Charley Boorman adventure series airing on Apple TV.

Or it might be a name that has passed you by.

Either way, we reckon you’re going to be hearing a lot more about Rivian over the next few years.

Why is Rivian big news?

It’s a new company that aims to disrupt the automotive scene with pure electric vehicles launched under a cool brand.

And where have you heard that before? That’s right – Tesla. But surely, you’re crying, there are plenty of start-ups that look to Tesla and think they can do something similar, what makes Rivian different?

Before we come onto why Rivian needs to be taken a little more seriously than other new brands, it’s worth telling the story of how it started.

It was founded by 37-year-old Robert ‘R.J’ Scaringe who dreamt of starting his own car company when he was a teenager. He began the firm more than 10 years ago with the idea to build an all-electric sports car (just like Tesla), but the company went quiet and that could have been it.

Then, in mid-2018, Rivian was back. This unheard of brand turned up at the LA Auto Show and announced plans to build an all electric pickup called the R1T and an all-electric SUV called the R1S. 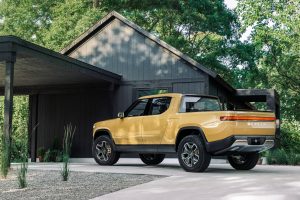 What is Rivian working on now?

It’s readying the R1T (which appeared in Long Way Up) and the R1S, but it has quite a lot on its plate.

Scaringe has raised $1.7bn from Amazon and $500m from Ford. Amazon has placed a $5bn order for 100,000 fully electric delivery vans as part of its ‘Climate Pledge’, while Ford will build a new Lincoln SUV in partnership with Rivian.

Apart from those ‘small’ projects, Rivian has also said it plans to build a rally-car-style vehicle as its third model.

Rivian has also been on a hiring spree and pinched employees from Tesla, Ford, Faraday Future and McLaren Automotive.

Its workforce is around the 750 mark and its chief technology officer is Mike Bell – the man who played a key role in launching the iPhone.

Are the vehicles real?

They most certainly are. While Elon Musk is well known for blurting out ambitious sales targets, Rivian is a lot more subtle.

Scaringe has gone on record saying 2021 will be the first year of production for its vehicles and between 20,000 and 40,000 units will be made. That’s no small number. The challenges are great for the start-up especially with Ford and Amazon investing in the company, with the two firms expecting high quality products that will hit the ground running. 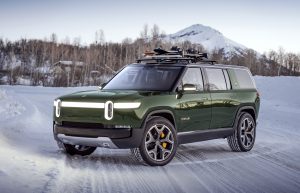 What are the Rivian R1T and R1S?

The R1T is designed to be a tough, very rugged and pure electric pick-up – and Rivian will probably beat Tesla to the spoils in being the first to build a pure EV pick-up.

The R1S is the more intriguing as this will take on not just Tesla, but the established names in the SUV world like Land Rover and Jeep.

It’s about the same size as a Tesla Model X or an Audi Q7 and has a few Range Rover design cues. It’s based on a new platform – naturally – and the batteries sit within the floor.

It’s designed to be excellent off-road so the R1S gets four electric motors – one for each wheel, aiding off-road traction.

Combined power output will be well over 700bhp and Rivian says the Porsche Cayenne Turbo has been benchmarked for on-road performance and of course Land Rover products off-road. 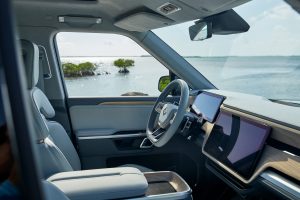 Will Rivian be coming to the UK?

Production will be in the US at an old Mitsubishi factory and will begin early in 2021. The US market will be prioritised first but a European launch is expected in 2022 along with UK, right-hand drive sales.

What about a UK dealer network?

This is one we don’t know the answer to, but we would guess Rivian would adopt a Tesla-style operation of online sales backed up by a network of physical service centres.