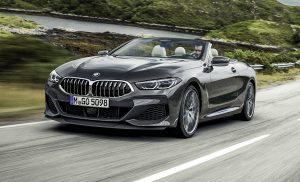 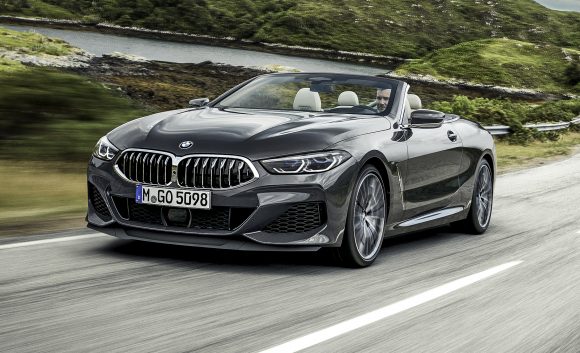 If you’re going to drop six figures on a luxury cabriolet, it’s going to have to be pretty special – and there’s some incredible machinery at this price point.

Want a luxury long-distance motorway mile muncher? The Mercedes S-Class Coupe is hard to beat. However, BMW doesn’t even see that as a rival, considering its drop-top ‘8’ – the car we’re looking at here – closer to something like the Aston Martin DB11 Volante.

On first impressions, it seems to lack the theatre of the Brit and the opulence of the German – a perfect compromise or missing the mark?

This is the first time BMW has offered an 8 Series Convertible, which is essentially a bigger, more upmarket replacement for the 6 Series.

Much like the coupe 8, the convertible is based on the same platform as the 7 Series.

Chopping the roof off such a large vehicle runs the risk of creating a chassis that flexes like an overly enthusiastic yoga instructor.

However, to keep the body in check BMW has done some extra welding and reinforcing to add to the 8 Series’ already-stiff carbon-fibre core, claiming the convertible is only two per cent less stiff than the coupe.

Beneath the prominent snout sits a ferocious 4.4-litre, twin-turbocharged V8 engine that makes 523bhp and 750Nm of torque. That’s routed to all four wheels through an eight-speed automatic gearbox, with the result being a sub-four-second 0-60mph sprint. That feels brilliantly obscene in such a big, heavy car.

BMW has absolutely nailed a mix of fire-breathing ferocity and silky-smooth responsiveness.

Cruising about at normal speeds, the V8 feels refined and happy to sit in the background. But it’s always ready to unleash its inner brute. The noise-plus-cabrio mix is intoxicating.

Here’s where it starts to get complicated. BMW is determined  to call the 8 Series Convertible a sports car – more Porsche 911 than S-Class. But it can’t quite live up to that comparison.

This is a big, heavy car, weighing in at just over two tonnes. To be fair to BMW, it hides it well when you’re attacking corners, but it just doesn’t show the agility or sharp response you want from a proper sports car.

Where it excels, though, is as a GT. Drop the roof and revel in the sound of the V8, cruising in sumptuous comfort surrounded by impressive technology and digital displays – suddenly the 8 Series Convertible starts to come together.

The BMW 8 Series looks about as close to a German interpretation of American muscle car culture as you can get.

Up front there are aggressively styled headlights and angular intakes built into the bumper, while the typical kidney grille has been flipped. The result is a brawny, muscular car that perfectly suits the bark of the V8.

As you’d expect from something that starts in the six-figure price bracket, the 8 Series Convertible’s interior is of the highest quality.

BMW falls behind Mercedes-Benz’s cabins in this price bracket, but there’s a simpler elegance in here that makes the S-Class feel a little OTT, while the latest-generation iDrive infotainment system is as brilliant as ever.

As you’d expect from a 2+2, the rear seats are a token effort – only children could feasibly spend long periods in the back.

The entry-level trim in the UK is M Sport, which includes 20-inch alloy wheels, sporty bodywork extras, an M Sport differential and a sports exhaust system to make the most of that glorious V8.

Inside, there are leather-trimmed instruments and door panels, a leather steering wheel and velour floor mats. Standard technology includes BMW’s assistance and connected packages, which have connected navigation, Apple CarPlay, emergency assistance and other ‘intelligent’ functions.

Forbes commented: ‘There’s something kind of strange about the new BMW M850i. It really shouldn’t be this good.’ Motor1.com said the car ‘seamlessly blends agility and class’.