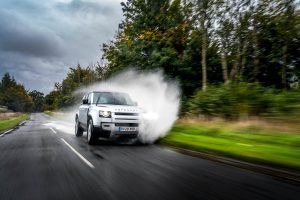 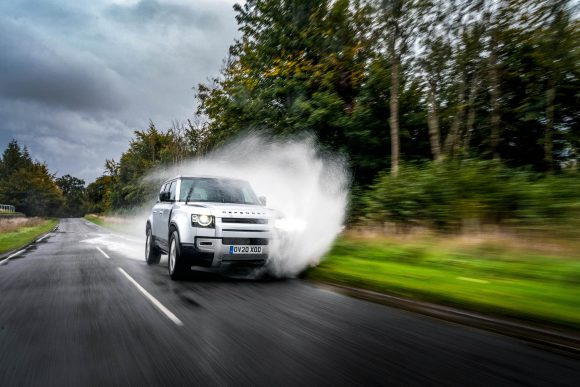 What’s in a name? If you’re the Land Rover Defender, quite a lot as it so happens, writes Jack Evans.

When a car has decades of history, legions of fans across the globe and a reputation for being pretty much unstoppable off road, making a new one represents quite the challenge.

In truth, I almost felt a bit sorry for JLR. Tasked with reimagining an icon is no mean feat, and it certainly felt that whatever it did there were going to be people who disagreed.

And when it came out and the car you see in the pictures here arrived in the UK, there were almost immediate naysayers. ‘You can’t hose it out!’ they cried. ‘Farmers aren’t going to use that!’ others shouted. But let’s leave the keyboard warriors aside for a minute and focus on just what this new Defender is like. 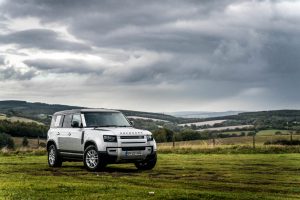 Because, from the outside at least, things look rather successful. It’s boxy, upright and just a little imposing. There are small nods to the past through its aesthetic, but this is very much a new thing.

It certainly feels like a new thing inside, too. Although Land Rover has decided to keep some exposed bolt heads on the doors like the original, the cabin is head and shoulders more comfortable, more refined and more accomplished than the one it replaces. Many people highlight the positives of the old Defender – and I’ll be the first to back them up on much of these – but interior quality wasn’t one of them. You couldn’t even fit your right arm in while driving, which is why you always see Landie owners driving with the window down. Great in summer, but a little offputting when the weather turns cold. 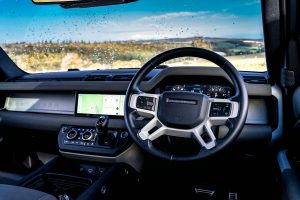 Thankfully, it feels robust and solid. There are rubberised elements throughout, while the major controls have a chunky feel to them.

The Defender now makes sense as a family car, too. The space in the back is excellent, while the boot is large and easy to access as well. Although the side-hinged boot might be a bit of a pain in smaller parking spaces, it means that, when you’ve got the room, you can access the full area of the boot. There’s also a three-pin socket back there for charging devices – something we found particularly handy during our test.

In fact, there are USB sockets dotted across the cabin. It’s like Willy Wonka’s Great Glass Elevator but rather than buttons on every surface there are power sockets.

Up front, you’ve got JLR’s latest Pivi Pro system and boy, does it raise the game. Previous systems on other Jaguar Land Rover products have been off the pace of rivals, but this new system is sharp, responsive and easy to navigate. It raises the overall feeling of the Defender, too.

But what’s it like to drive? Underneath the bonnet we’ve got an Ingenium turbocharged diesel with 240bhp and 430Nm of torque, driving all four wheels through an automatic gearbox. Land Rover claims up to 31.7mpg, while emissions of 253g/km CO2 are pretty much what you’d expect from this type of car. It’s a robust engine this one, gracing the Defender with enough pulling power to merge on to motorways and quicker stretches of road without getting into too much of a huff.

Zero to 60mph comes in at a snick under 10 seconds, which is more than respectable given the Defender’s considerable heft.

Out on the open road the Defender really impresses. Cruising at motorway speeds, it settles down impressively well, leaving you free to enjoy the ride in the largely refined interior. There isn’t too much intrusion into the cabin from road or wind noise either, which is remarkable given its upright stance. 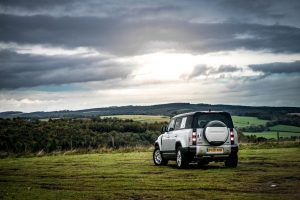 In the bends, the Defender does let you know about its size and weight but it does well to keep it largely in check. Yes, there’s some body lean through the corners, but the steering is well weighted and accurate enough to manage this. It’s also a car that doesn’t goad you into driving more quickly; if you feel like you’re leaning too much, you simply back off and let the car settle down. It’s quite a relaxing way to drive, if I’m honest.

I got a short chance to drive the Defender on some light off-road surfaces and it was barely troubled by them. My colleague Darren has taken it on some seriously challenging terrains previously and tells me that it’s close to unstoppable when the going gets tough. So it certainly ticks the ‘traditional’ Defender boxes there.

It’s best to see this car as a completely new thing. Yes, it might share the same name as the classic off-roader beloved by thousands but this new Defender should be seen as a proper car in its own right. As a fully rounded, all-capable off-roader, it’s a mightily impressive thing. I’ve left it desperately wanting one.

More Road Test of the Year