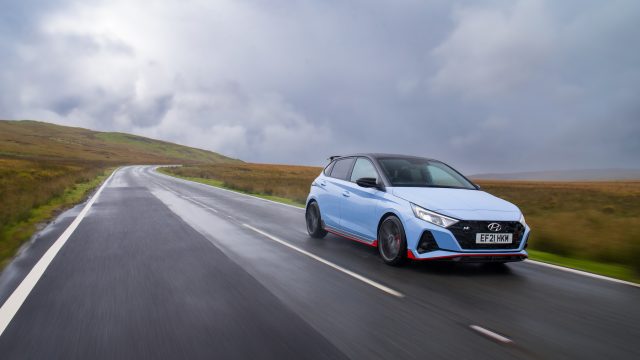 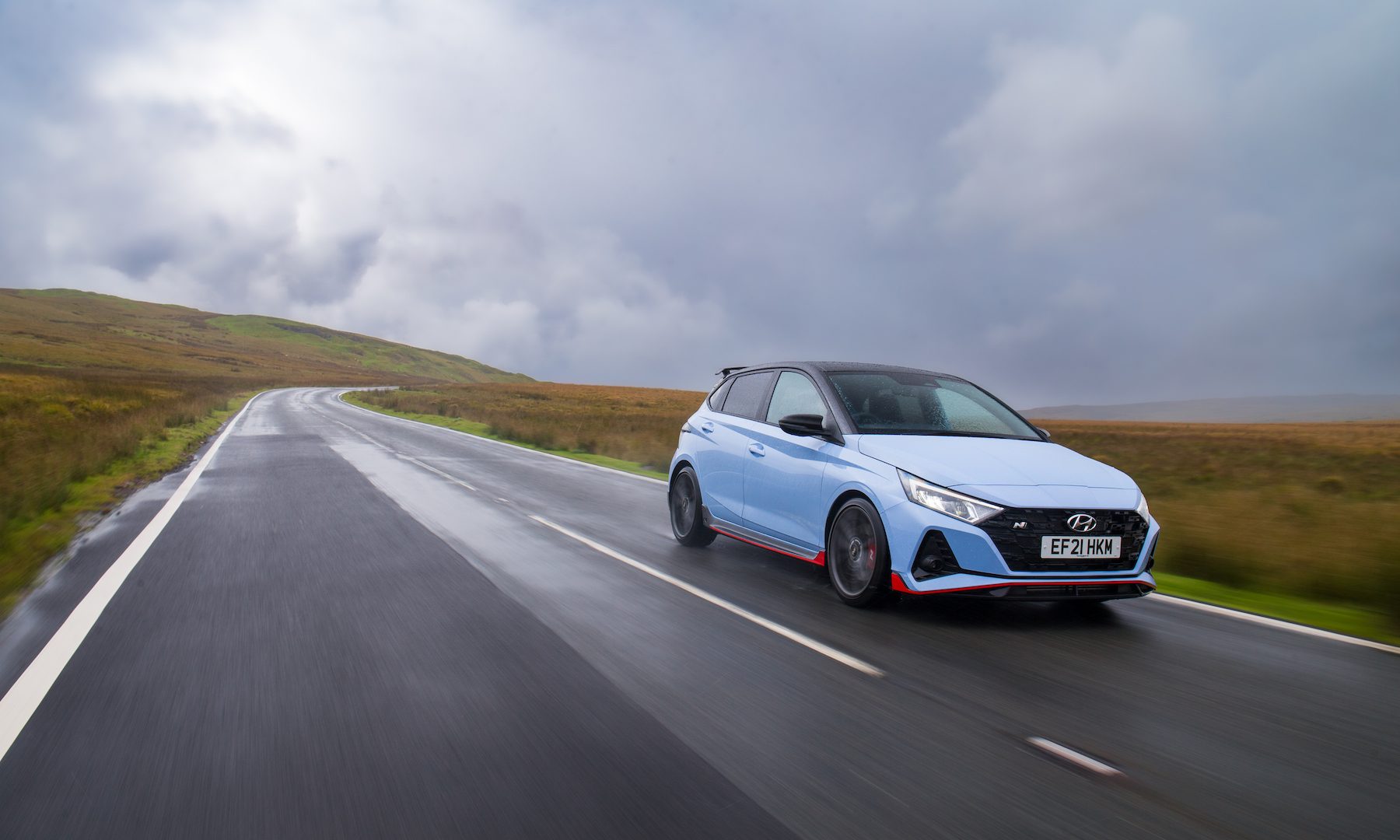 Could someone check on Hyundai? They say the past 18 months have affected everyone in strange ways, but our new-found fixation with anti-bac wipes and two-metre distancing has got nothing on the sudden personality change of a certain South Korean car company.

I’m not talking about Hyundai and Kia’s pivot to producing properly competitive cars – that was over a decade ago, do keep up. What’s taken a bit longer is for Hyundai to find its mojo: not to let its models sit back as the plain Jane cousins to Kia’s Peter Schreyer-penned models.

So here we have the first-ever interesting Hyundai i20: a car whose previous unenviable role was to not upstage the Kia Rio. The styling’s certainly an improvement, as is the interior, but it’s not here just for being a jolly nice supermini: we’ve brought it to Wales because Hyundai has somehow built a Fiesta ST slayer, and on its first attempt. 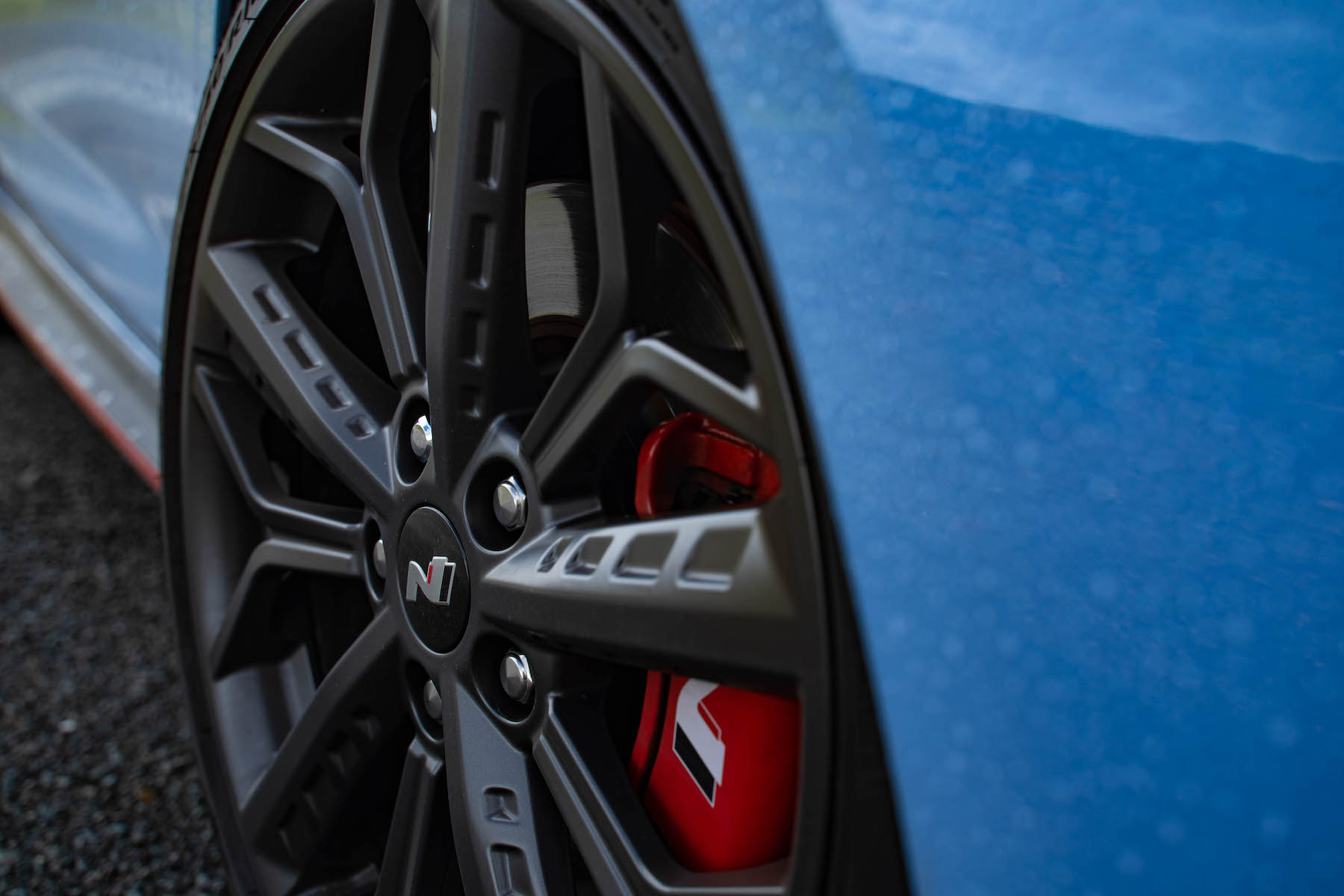 As you’ll have gathered, this is the Nurburgring-honed i20 N – following on from other such models as the i30 N, the i30 N Fastback and… oh that’s it. To dismiss its apparent lack of pedigree would be a mistake, though – Hyundai’s performance division really isn’t messing about.

Just as Kia knew its best chance at European success was to hire a famed European designer, Hyundai headhunted none other than BMW M division star Albert Biermann – and just five years later, it’s clear the investment is paying off. Like its bigger brother, the i20 N has all the visual jewellery you’d expect of a shouty hot hatch – front and rear splitters, that all-important rear boot spoiler, and of course the N models’ signature red trim and baby blue paint combo. If you’re the sort of person who doesn’t like your performance car to blend in – and I’m one of them – it certainly looks the part. 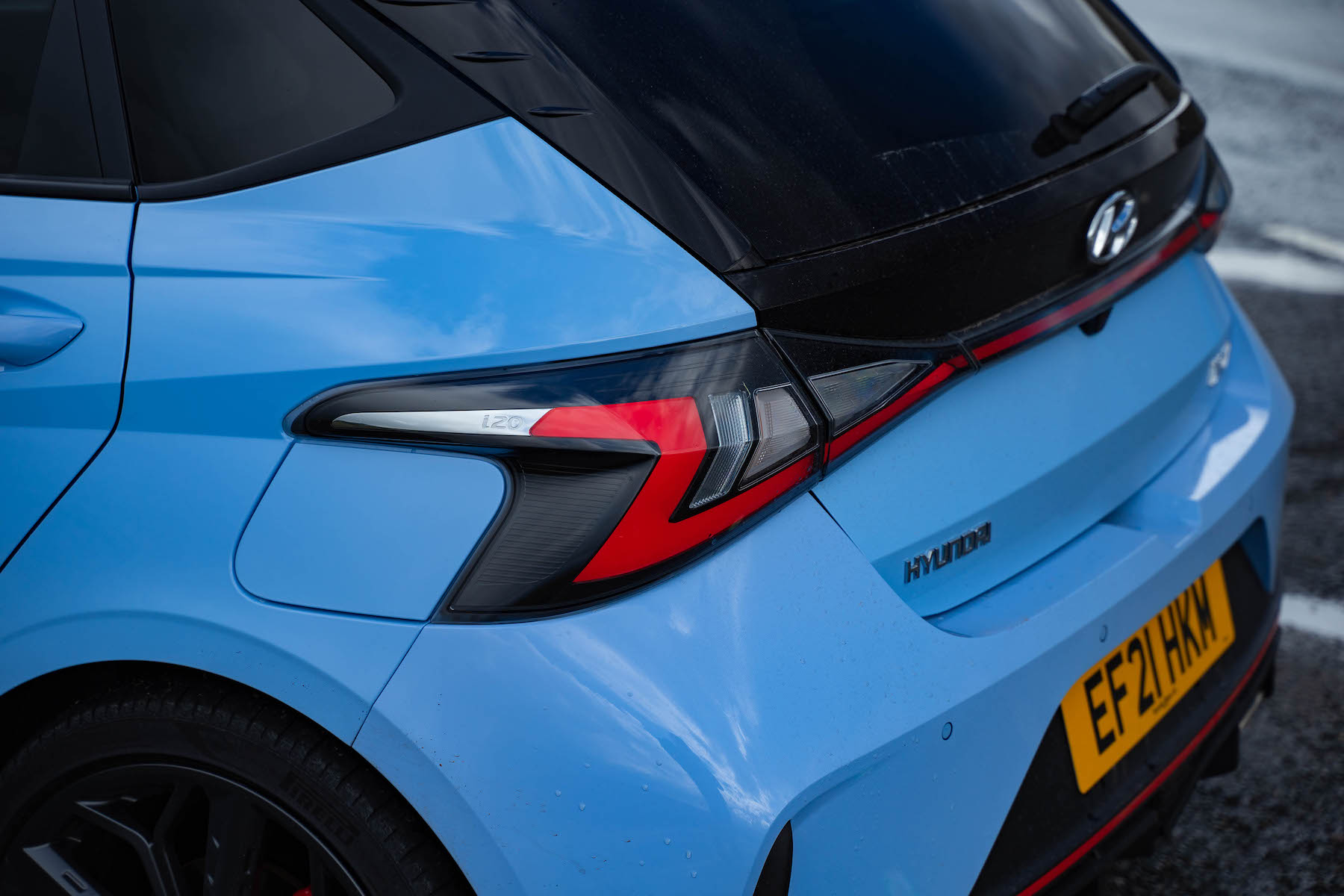 As you’d expect, Biermann und das Team have spent plenty of time on the i20’s chassis too: the N sits 40mm lower than a standard i20, has firmer springs, and its dainty shell is strengthened and braced in all kinds of places to feel every part the miniature M – sorry, N car. Under the bonnet there’s a turbocharged 1.6-litre four-cylinder – a more traditional setup than the Fiesta ST and its emissions-friendly three-pot, with a more traditional soundtrack to boot. Some – not I – would say the wee Hyundai’s engine note is a bit less characterful than the Ford’s, but pay them no mind – the ST’s pantomime-like booming is no match for the N’s old(er) school raucousness in my eyes.

Make no mistake though, the N is every bit a modern hot hatch: instantaneous power delivery, a ludicrously grippy front end – aided by a limited-slip differential of Hyundai’s own design – and a firm, but not punishing, ride. 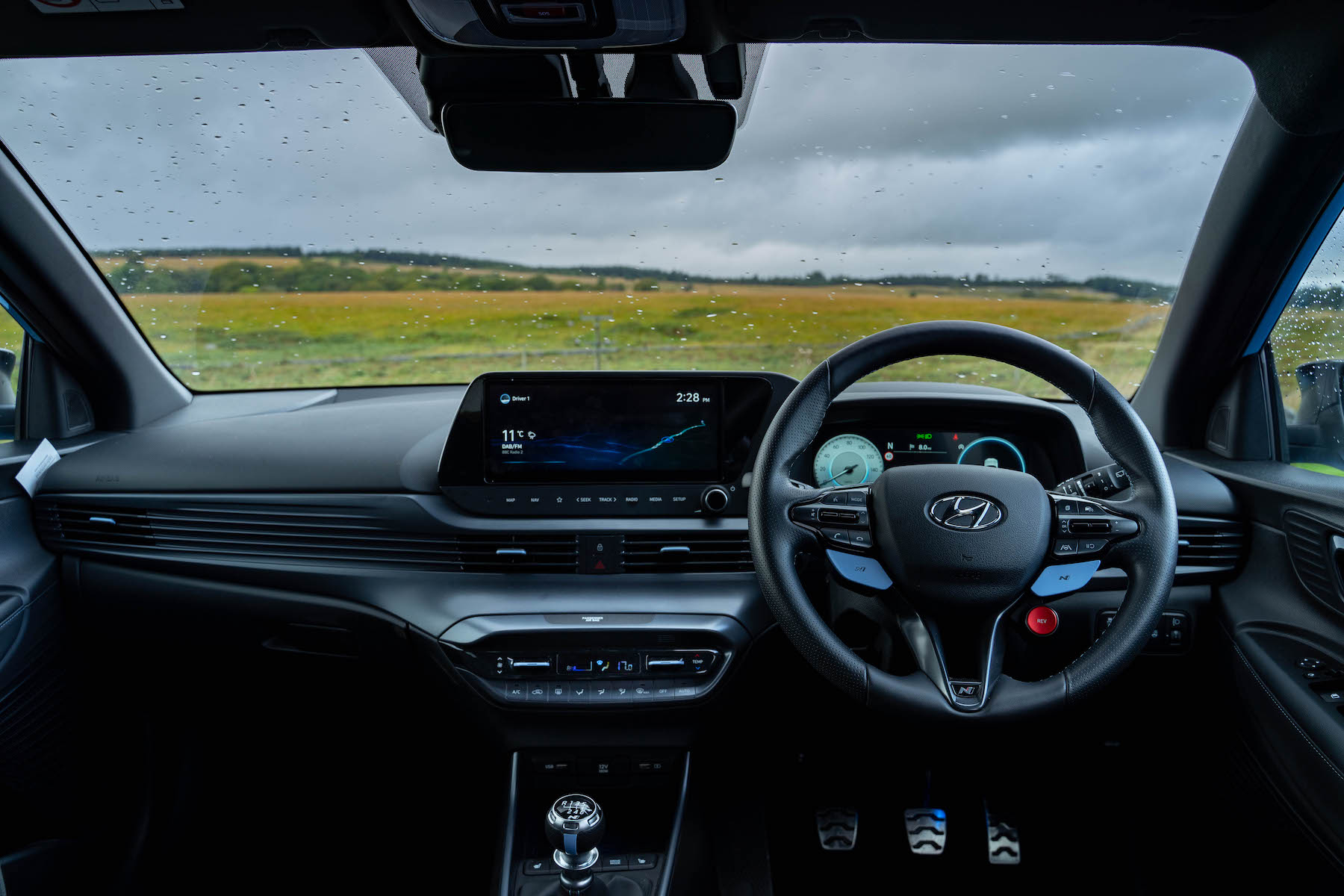 Around the undulating B-roads of Wales – and particularly in this company – the whole package feels almost custom-built for the job at hand. The steering is accurate with just the right amount of weight – provided you leave the different modes alone, anyway – and avoids the tendency of some LSD-equipped hot hatches to feel totally unnatural when cornering hard.

The springs and dampers, while a bit firm at lower speeds, make mincemeat of the peaks and crests of the Brecon Beacons’ finest tarmac, with a sort of fluidity you’d expect from a car much bigger and more expensive than the i20. Hyundai has nailed the pedal feel too, and for someone wearing size 10 Timberlands on a cold and wet Welsh morning, it’s a pleasure to find them not squished perilously close together either. 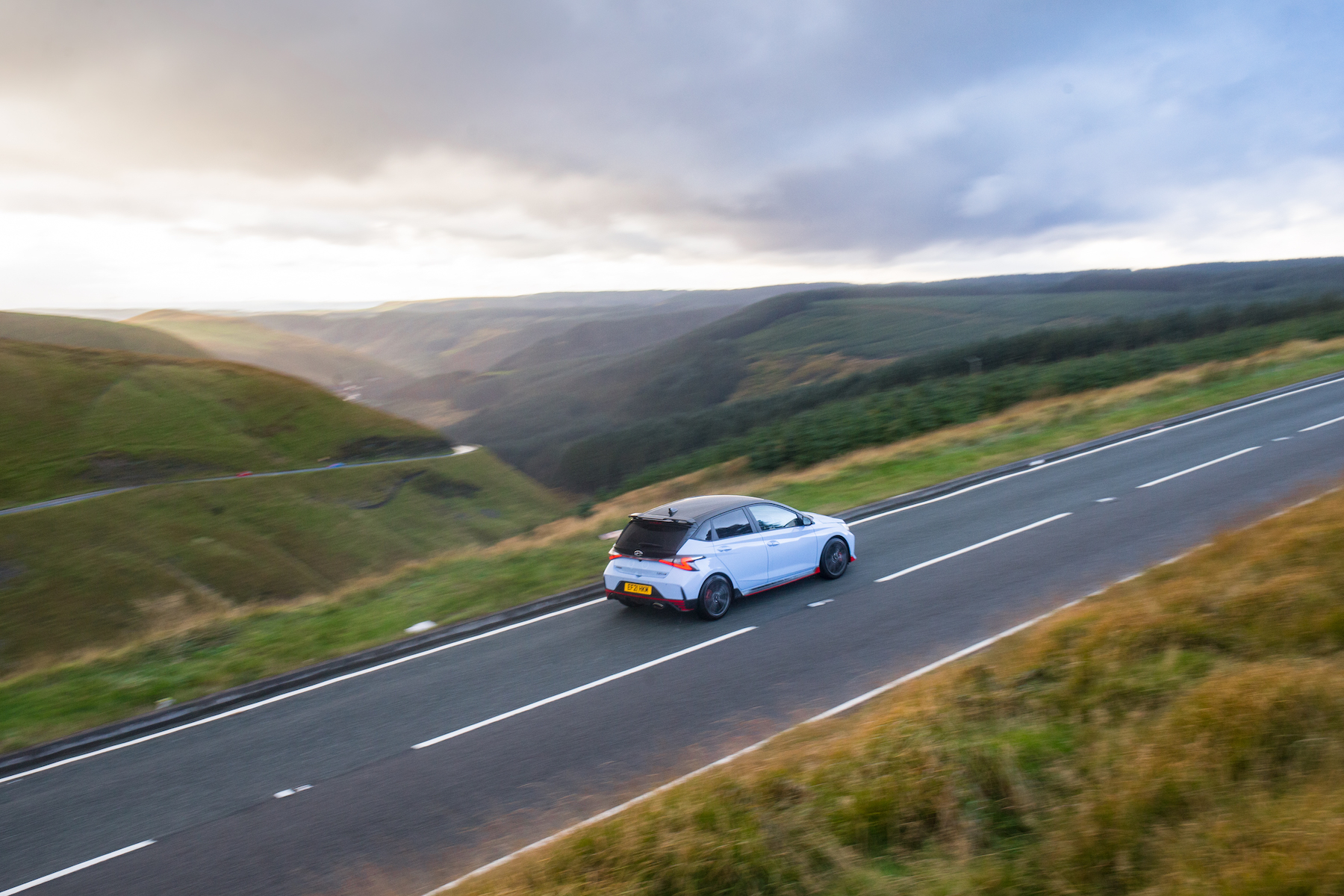 Reader, I have some surprising news: it’s not bad. Despite the shouty exterior and badge that may or may not stand for Nurburgring, the i20 is an easy car to live with. Hop inside and you’ll find a – well, if I’m honest, a slightly boring interior. The gearbox is light and easy to use – not artificially ‘meaty’ for the sake of it. The seats are supportive and sporty but – unlike a Fiesta ST’s – don’t feel like the bolsters are trying to squeeze you into pâté.

Nor does it goad you into bad behaviour quite like the ST does. The Fiesta feels desperate for you to mash your right foot into the carpet, but oddly the i20 doesn’t – it isn’t as try-hard-for-your attention somehow. This is probably the most surprising – and impressive – thing of all about the i20 N. Not only has Hyundai effectively come out of nowhere with a proper small hot hatch, but – loud exhaust and shouty exterior aside – it’s made one that’s perfectly usable day to day. And d’you know what? It’s the one I’d have over a Fiesta, too. Now there’s a phrase I never thought I’d say about a Hyundai i20.