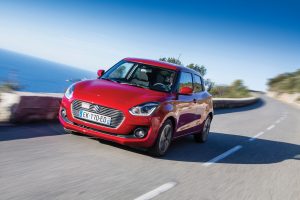 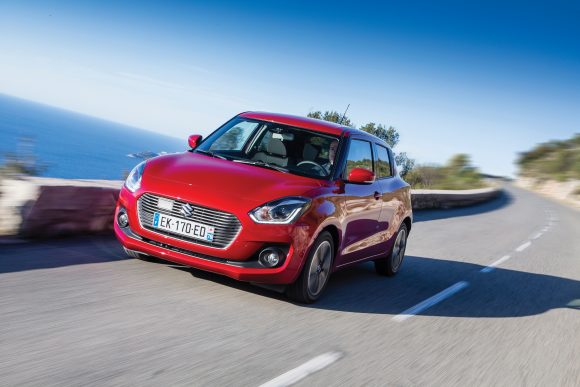 Simon Davis had the chance to put the refreshed and revised supermini to the test across the Channel in France.

Suzuki is hoping that its new third-generation Swift will be something of a giant-slayer. With it, the Japanese firm is looking to break into the top-10 portion of the B-segment market, and has the likes of the Seat Ibiza, Skoda Fabia and Hyundai i20 firmly in its sights. To give the refreshed and revised supermini a fighting chance, Suzuki has really gone to town. The 1.0-litre Boosterjet engine that first appeared in the Baleno and S-Cross is available for the first time, standard equipment levels have been improved and the Swift has lost 120kg in bodyweight.

Suzuki offers the Swift with a choice of two petrol engines. The first is the 1.0-litre, three-cylinder Boosterjet unit that has appeared in the likes of the Baleno and S-Cross and was fitted to our  test car. In standard guise, it produces 110bhp and 170Nm of torque, and is capable of shifting the Suzuki from 0-60mph in a not-so-swift 10.4 seconds when paired with a  manual transmission.

While the Swift is by no means a hugely powerful car, thanks to its small size and the fact that it weighs just 840kg, on a windy road it feels like a little go-kart. The steering is light and allows you to point the Swift where you want with ease, while the notchy five-speed manual has a purposeful feel to it.
There is a fair amount of body roll through  the corners, but as far as grip is concerned, the Swift feels planted. Rough surfaces – which were fairly few and far between on the French roads we tested it on – can cause it to bounce around a bit, however, so it will be interesting to see how it copes on bumpy British tarmac.

Auto Express said: ‘The Suzuki Swift is an easy enough car to like, with smart design that builds on the cute looks of its predecessors, and some excellent efficiency figures. But its interior finish is no better than the class average, the ride is brittle and the infotainment system is clunky and slow to respond.’ The Daily Record said: ‘The new Suzuki Swift is just as attractive as its predecessor and comes with loads of extra systems and driver aids that cannot fail to please.’ Car Magazine said: ‘There was never much wrong with the way the old Swift drove. But this one has taken a significant leap in a number of areas.’

Suzuki can consider the new Swift a job well done. It’s certainly not the most exciting car on the market, or the most luxurious, but there was something rather charming about its unpretentious, no-nonsense manner. The only things that remains to be seen now is how well it deals with British roads, and whether Suzuki can get it right as far as pricing is concerned. If it does well on both fronts, the Swift is shaping up to be quite a success. Can it do well enough to break into the B-segment top 10? Only time will tell, but we wouldn’t bet against it doing so. Watch this space.