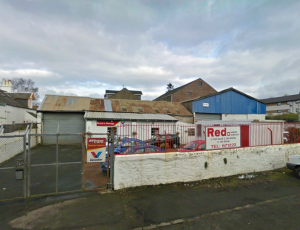 A CAR DEALER in Helenburgh, Scotland, has gone to war with Aviva – after the insurance company refused to cover damage to a vehicle caused by a falling roof.

Iain Thompson,  director of the ‘Red Vehicle Solutions’ dealership in the town, had his BMW 328 Coupe wrecked by a falling roof in January of last year – caused by the ‘ferocious’ storms that hit the town that day.

The roof of the building in question had recently been repaired but Aviva, the property’s insurance company, has so far refused to accept Thompson’s claim.

‘The roof blew off a block of flats near where my car was left and completely destroyed the property,’ Thompson told local paper the Lennox Herald.

‘All the residents had to leave while it was rebuilt – and some of the roof landed on top of my car, causing a serious amount of damage.

Thompson put in a claim for £2,300 – understood to be the cost price of the car, which was up for sale at £3,500. Local estimates put repairing the damage at around £4,000, meaning that the car is essentially written off.

‘Aviva insist that the damage was not the fault of the person who carried out the repairs. Aviva are paying out to rebuild the property – but my car is sitting badly damaged and they will not pay out for that.’

‘I have had my broker dealing with them for some time now and have not got anywhere. What is the point of having insurance in cases like this?’

It’s thought that incident came down to a common insurance  blindspot – ‘Acts of God’ – with Aviva refusing to pay out because the collapse wasn’t the fault of an individual.

An Aviva spokesman told the Herald: ‘In August 2012 we were contacted by Mr Thomson’s broker to make a claim for damage to his vehicle.’

‘This claim was declined because for us to accept liability on behalf of the customer then it has to be proved that they were negligent. Our customer was not negligent as the roof was in sound condition.

‘Mr Thomson could consider claiming on his own motor policy, which should cover this kind of damage.’