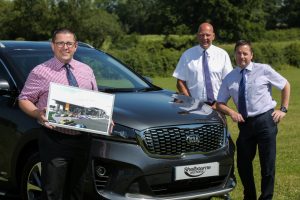 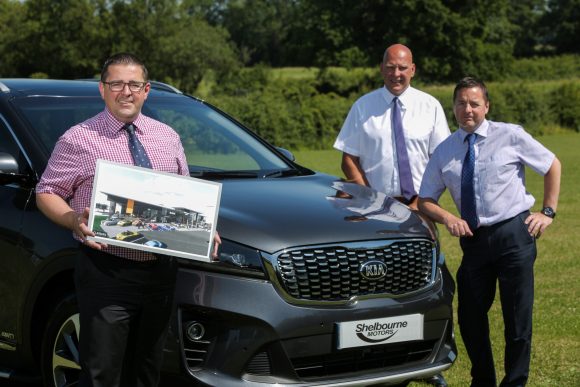 SHELBOURNE Motors has partnered with Kia to have one of the South Korean brand’s showrooms in the dealer group’s upcoming £5m multi-franchise complex in Newry.

The announcement makes Kia the first manufacturer to be confirmed for Shelbourne’s new state-of-the-art Northern Ireland facility, which is scheduled to open in early 2019.

The partnership will allow Kia to supply its range of new and used models to Shelbourne customers in the Newry and Mourne area.

The complex is a 50,000 sq ft development and will provide employment for 60 people when it opens, as well as 100 during construction.

There will be four new car showrooms, including Kia, a set of new car handover bays, a lounge-style waiting area with a café and a drive-through service centre with a 28-bay workshop.

Shelbourne Motors, which is a family-owned business founded in 1973, employs more than 130 people at its headquarters in Portadown, where it holds franchises for Toyota, Renault, Nissan and Dacia, as well as a used car supermarket, accident repair centre and valet centre.

‘Their exceptional reputation reaches far beyond Northern Ireland, and we are delighted to work with such a positive and forward-thinking business that continually strives to deliver a first-class sales and aftercare experience to its customers.

‘Newry is an extremely important location for Kia and this expansion represents an exciting step for our brand. This will be the first time that Kia will have a dedicated dealer supplying new and used Kia vehicles to the area.’

Paul Ward, director of Shelbourne Motors, said: ‘We’re delighted to partner with Kia to announce one of the world’s most popular car brands as the first franchise at our new £5m custom-built facility in Newry.

‘This is a real statement of intent by Shelbourne Motors. Kia is synonymous with driving comfort, quality, reliability, technology, competitive pricing and the market-leading seven-year warranty.

‘They are a perfect fit for us at our modern, multi-franchise complex in Newry and will undoubtedly strengthen our position as one of Northern Ireland’s largest family-owned vehicle retailers.’

On WorkshopMagazine.co.uk: Workshops urged to be transparent after new MOT changes