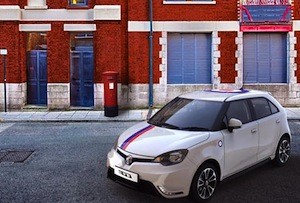 SMC Motor Group is gearing up to open its new MG showroom in Woking.

It will become the 12th new MG dealership to open in the last 18 months as the MG network of outlets continues to expand.

SMC is busy getting their three-car showroom prepared in St Johns Road, just off the A324, which will serve a large area of Surrey, Hampshire and the London commuter belt.

James Kimber, managing director of the SMC group, said: ‘We’re really excited about the new MG franchise and I think MG is going to be a real force again in British motoring.

‘The arrival of MG to our group is perfect timing with the recent launch of the MG3, which is a class-leading car and, alongside the MG6, I think it will do really well with our target audience here, many of whom will know and love the MG brand.’

SMC Motor Group has four operations serving Surrey and Hampshire, with two dealerships in Woking plus another in Aldershot and a fourth in Weybridge. It is a family-run business employing 71 people and next year the group celebrates its 30th anniversary.

Kimber added: ‘We are investing now in a new showroom in St Johns in Woking but our intention is to expand in the future as the MG business grows and we are very excited about the future.’

A new MG dealership is about to open for business in Gloucester and two dealerships have opened recently in Sheffield.