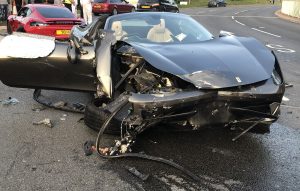 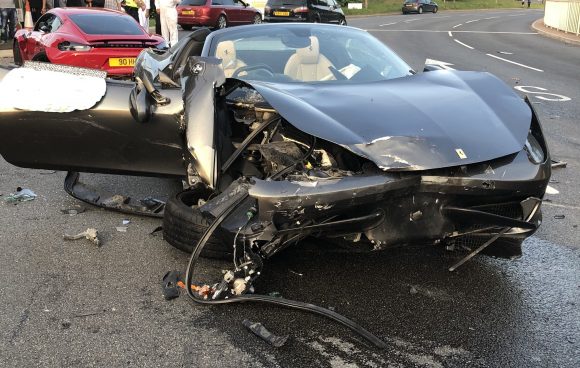 Supercar dealer spared jail after fleeing from scene of crash

A SUPERCAR dealer has been sentenced for dangerous driving after a Ferrari he was driving was involved in a crash with an £80,000 Porsche.

Images released by South Yorkshire Police show the smashed-up dark-grey Ferrari 458, worth around £180,000, and red Porsche 718 Cayman GTS following the incident on a roundabout in Sheffield.

Witnesses told the force that the two motorists – one of whom was 32-year-old supercar dealer Carl Hartley – had been adopting ‘racing-style’ behaviour in the lead-up to the crash, which took place at 7.55pm on May 20, 2018.

The Porsche driver, Henry James Hibbs, 27, suffered minor injuries in the collision, while Hartley, from Swadlincote, Derbyshire, fled from the scene before police arrived, a force spokesman said. 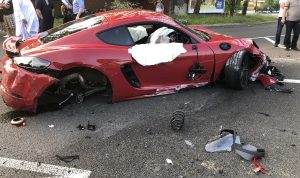 He later identified himself as being involved in the incident but said the smash had taken place because his brakes had failed.

However, extensive checks found no damage to the vehicle’s brakes, and investigators also discovered that the Ferrari’s airbags had deployed with the car travelling at 68mph.

The road the crash happened on has a 50mph speed limit, South Yorkshire Police said.

Hibbs, of New Ollerton, Nottinghamshire, was found guilty at Sheffield Crown Court of dangerous driving, while Hartley admitted the same offence at the start of the trial, the force added.

A spokesman said that, on Wednesday, Hibbs was handed a 10-month prison sentence, suspended for two years, and 220 hours of unpaid work. He was also disqualified from driving for two years.

Hartley, meanwhile, was sentenced to nine months in prison, suspended for two years, and was ordered to carry out 200 hours of unpaid work, the force added.

He too was disqualified from driving for two years.

PC Rod McEnery said: ‘Numerous witnesses came forward, all highlighting the ‘‘dangerous’’, ‘‘unsafe’’ and ‘‘racing style’’ behaviour that the drivers had been showcasing across South Yorkshire.

‘Vehicles racing and travelling at speed are a dangerous combination and this collision could have seriously injured the drivers and innocent road users.

‘I hope Hibbs and Hartley reflect on what consequences their actions could have had.’

Hartley is co-owner and director of the Tom Hartley supercar dealership and the son of founder Tom Hartley senior. He appeared in the 2015 Channel 4 programme First Cut – Supercars: the Million Pound Motors.