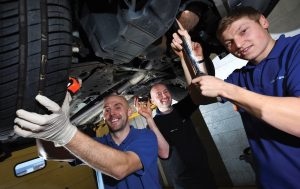 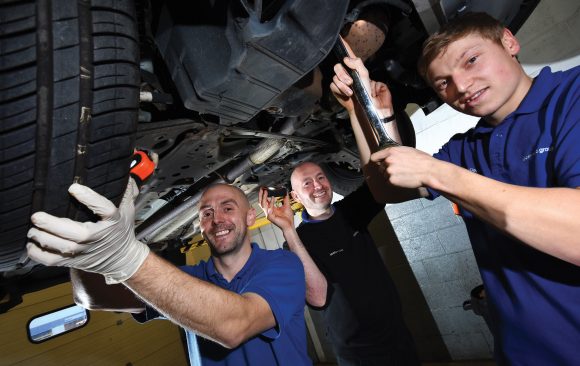 Supervisor inspires duo to aim for top as Master Technicians

TWO members of aftersales staff at Lookers Seat in Middlesbrough are aiming to follow in the footsteps of their supervisor and mentor by becoming Master Technicians.

Joseph Codling, 36, and Robert Oliver, 25, have just completed two years’ extensive training and assessments, which has steered them on the road to becoming fully fledged Seat-approved service technicians.

Ongoing support and encouragement from their supervisor and Master Technician mentor Matthew Jones, 36, who achieved the highest accolade with support from the company in 2011, has encouraged the duo to progress to the level of diagnostic technician.

The third step in the qualification process will be to work towards Master Technician status.

Codling, pictured left, said: ‘We’ve both truly been inspired by Matthew, who has been extremely supportive and encouraging throughout. He’s a fine example of what can be achieved when you’re given the opportunity to progress your career and achieve additional qualifications through your employer. We’re looking forward to working towards the next stage in the qualification process, but our overall goal is to achieve Master Technician status.’

He has worked at the former Jennings Motor Group dealership for the past 12 years. His career in motors began after he completed an apprenticeship at a local garage.

For the past four years, Oliver, right, a time-served apprentice, has worked within the service department at the dealership. He previously gained experience working at a local, independent garage.

The trio all live in Skelton, North Yorkshire, which means they also car-share the 24-mile round trip to and from their place of work each day.

Jones, centre, who has 18 years’ experience in the motor industry, said: ‘It’s quite a rarity to find three employees from the same company, all of whom share the same trade and live in the same small village.’