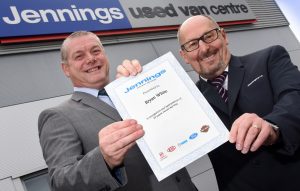 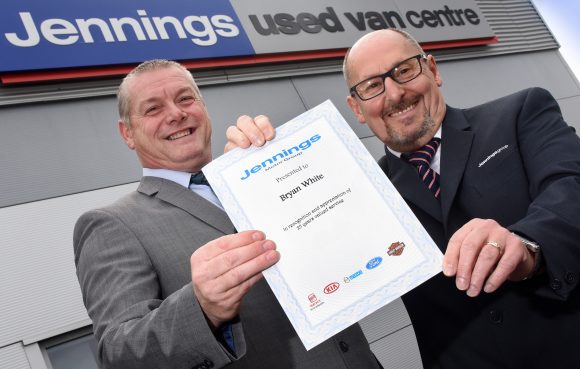 A MEMBER of staff at Jennings Ford Transit Centre has been rewarded for achieving 25 years’ loyalty.

Bryan White, 61, works as a sales controller/compliance manager at the group’s Ford Transit Centre in Middlesbrough.

To mark the 25-year milestone, Alan Bailes, general commercial manager at the Teesside-based dealership, presented him with high street vouchers and a loyalty certificate.

He said: ‘I would like to congratulate Bryan on his loyalty and commitment over the years. He is a dedicated member of staff and an asset to the sales team.’

White’s career with Jennings Motor Group began in 1993 when, after working for the previous seven years as a financial adviser, he decided to take a new career path that steered him into the world of the motor industry.

Over the years, he has gained vast experience in a variety of roles, which also resulted in a number of promotions.

His first role as a driver entailed travelling the length and breadth of the country delivering and picking up vehicles, in addition to transferring cars between branches throughout the region.

Within a short period of time, his potential was recognised and he was promoted to fleet sales executive at the group’s Ford Direct site in South Shields.

Gaining valuable experience – as well as working alongside the group’s business centres across the region – resulted in another promotion to sales controller/compliance manager and a transfer of dealership to Middlesbrough, where White is responsible for helping with the day-to-day running of the Transit centre, in addition to all aspects of customer finance.

It’s his third loyalty reward from his employer. Members of staff receive their first reward after 15 years, then again after every five years.

He said: ‘It’s great to have your hard work recognised in such a rewarding way as this.’

Jennings is now part of Lookers, after being bought by the national motor retailer last month.