THE unveiling of Tesla’s first electric pick-up truck has been marred by its supposedly ‘shatterproof’ windows breaking during a demonstration.

The car firm unveiled its first electric pick-up truck, known as CyberTruck, at an event in Los Angeles.

Tesla says the vehicle has ‘more utility than a truck, with more performance than a sports car’, while company boss Elon Musk attempted to show off its ruggedness with a live demonstration. 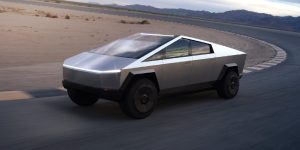 However, during the bizarre series of demos, Tesla head of design Franz von Holzhausen broke both side windows on the CyberTruck on stage by throwing a metal ball at them.

This led a clearly sheepish Mr Musk to say ‘at least it didn’t go through’ and that there was ‘room for improvement’.

Mr Musk had already asked Mr von Holzhausen to hit the door of the truck repeatedly with a sledgehammer, before suggesting it was nearly bulletproof.

The futuristic-looking vehicle will be released at the end of 2021, and have a range of up to 500 miles.

Tesla also said the top-of-the-range, triple electric motor version of the CyberTruck would be capable of going from zero to 60 miles an hour in 2.9 seconds – comparable with many sports cars.

He had teased the idea of creating a truck for some time, first tweeting about building a truck in 2012, before including the idea in his so-called ‘master plan’ for the company, published in 2016.

Mr Musk also referenced the unusual design of the CyberTruck last year, saying in an interview with Recode that the vehicle had taken on a ‘futuristic-like cyberpunk, Blade Runner design’.

As part of the announcement, Mr Musk also unveiled a quad bike built by the company, which can fit into the back of the CyberTruck and also be charged once there.