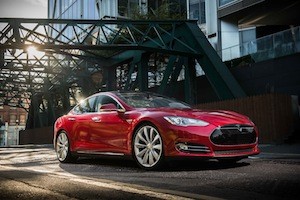 TESLA Motors has opened its very first retail store in the UK, based at London’s Westfield Shopping Centre.

The new store, based in White City, features interactive displays and design studios, which enable customers to design their own Model S.

Following the launch of the new London Store, the firm has also announced that prices for the on-road Model S in the UK will start from £49,900.

Musk said: ‘Tesla is taking the UK market very seriously, and there are more stores and service centres to come.

‘We’re also going to establish a Supercharger network so Model S customers will be able to drive long distances anywhere in the UK using our network for free, forever.’

He added: ‘The first Supercharger will be energised next quarter and we’ll aspire to have the entire country covered by end of next year. Most importantly, we are hard at work with right hand drive Model S, and we aim to deliver the first one by the end of March 2014.’