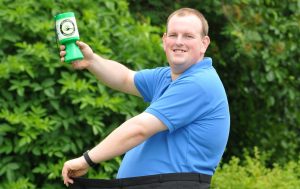 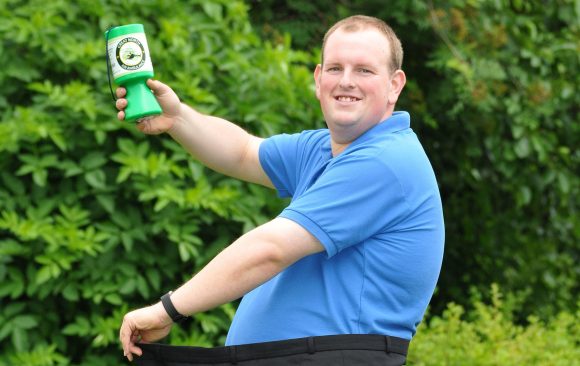 A JENNINGS Ford employee is on track to a healthier and happier lifestyle after shedding nearly 14 stone in 10 months – and raising money for the Great North Air Ambulance Service in the process.

Ben Grigg, a parts advisor at the Gateshead branch, started dieting last September after reaching 33 stone. Sticking to a healthy eating and exercise regime soon saw him start to see and feel the benefits of his hard work, which further boosted his determination to lose more weight.

Grigg, 27, from Prudhoe in Northumberland, said: ‘It’s a complete change of lifestyle and it was very hard adapting at first. You have to be 100 per cent focused, motivated and determined 24/7.’

Taking that life-changing step resulted in him losing a beefy 13 stone 8½ lb, part of which was achieved through a competition organised by Jennings Motor Group. 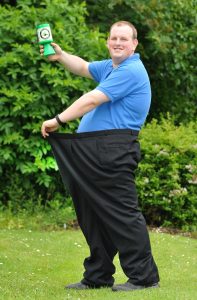 Ben Grigg in an old pair of his trousers

He was one of seven participants across the group who took part in a weight-loss contest. Losing five stone over three months resulted in him not only winning the competition, but also raising £365 for the company’s nominated charity – the Great North Air Ambulance Service. At the end of the contest, the grand total raised by staff was £892, with a combined weight loss in excess of 15 stone.

Nas Khan, Jennings Motor Group’s managing director, said: ‘I would like to congratulate every member of staff who took part in the fundraising competition. All participants did extremely well and boosted funds for our nominated charity. Ben should be immensely proud of his achievement, which has also raised money for a very worthy cause.’

The motor dealer group, which is based in the north-east of England, has supported the charity for the past two years. Last year more than £135,000 was raised as a result of internal fundraising and by the company donating a new Kia Rio for the charity’s annual car raffle. For this year’s raffle, a new Kia Sportage has been donated by Jennings Kia’s Stockton and Washington-based dealerships.

And the weight-loss battle isn’t over for Grigg, who currently weighs 19 stone 8½ lb – he’s determined to reach his target weight of 16 stone by the end of the year.

‘My ultimate aim is to be able to take part in the Blaydon Race next year. It’s something I’ve always wanted to do – and I’m determined I will do it with help and support from my mum, Norma Grigg. She’s been my inspiration and absolute rock throughout.’