Sporty looks inside and out – but plenty of comfort, too

WHEN it comes to performance hot hatches, Ford has never been short of offerings to keep the boy-racer crowd happy, whether it was the super-quick Escort RS Turbo of the late ’80s or the outrageous Escort RS Cosworth of the ’90s.

But in the early Noughties, the Focus was born and with it came the ST, which was more of a warm hatch rather than a full-blown replica of the performance-based forebears. It promised moderate pace for the family rather than all-out thrills that had become synonymous with the RS branding.

This performance pecking order continues with the latest version of the ST, and although it’s not the most all-singing, all-dancing hot hatch Ford makes, it still pumps out an impressive 247bhp. Out has gone the 2.5-litre five-cylinder Volvo-sourced engine, replaced by a cleaner 2.0-litre four-cylinder petrol engine that’s driven through the front wheels. What’s even more impressive is that when you think back to the demonic Cosworth-tuned Escort turbo of the ’90s, that only produced 225bhp. 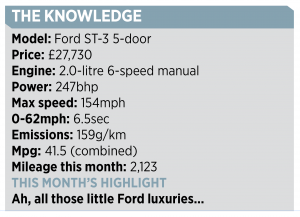 So the ST is what you’d call the sensible choice, for someone who likes more aggressive looks with a bit of extra oomph, but without attracting attention at the McDonald’s car park.

There’s nothing overblown when it comes to the styling. The ST rides 10mm lower than the standard Focus, and gets a roof spoiler to reduce lift and drag, and a one-piece grille, as well as the ST badging all round.

Inside, the sporty theme continues with snug Recaro sports seats through to the three dials that pop out of the top of the dash to display the boost, oil pressure and water temperature. A neat touch, but a bit unnecessary.

As regular readers of our long-term updates will know, I’m usually responsible for looking after our Volkswagen Transporter. But, with several staff house moves on the cards, our DUB has turned into the Gosport branch of Pickfords, meaning I’ve temporarily moved into our Ford Focus ST for a few days.

Now, as much as I’m missing the cabin space, I’m quite enjoying time with our Essex boy special. Okay, it might not be what you’d call the perfect camera car, but it came into its own during filming on a Lamborghini shoot recently, acting as a great tracking car. Motoring anoraks will notice the McLaren in the pic, but unfortunately that wasn’t part of the shoot. The ride was surprisingly compliant for a car that’s largely performance based.

What I’m really loving, though, is the luxuries I don’t get with the van. Even some of the simple extras you’d expect as standard on most new cars now make longer journeys effortless.

Extras like cruise control and an easy-to-operate entertainment unit, even being able to pair and answer my phone easily through controls on the steering wheel, make a welcome change.