Like the best success stories, Trade to Trade began with a simple idea designed around a community, which has since mushroomed and earned it national praise.

Founded by James Vaughan and Ben Mitchell, the business started as a Facebook page for dealers to simply and easily trade cars between each other.

The group now has over 9,000 members and Vaughan and Mitchell have invested in a fully-fledged smartphone app to develop the business.

Users love the operation – so much so dealers right across the country voted the firm the best of its type in the prestigious Car Dealer Power awards 2020. The business scooped the coveted Trade-to-Trade Remarketer of the Year category – you can read more about this here.

But how did the business start, why do dealers love it and how does it work? In the video above, James Vaughan and Ben Mitchell explain all. Below is a snippet of the full interview.

How did Trade to Trade start?

As most of our hair-brained ideas come about, we were out having a drink one night after a decent week selling cars. At the time we both had our own individual car pitches and we only had a handful of dealers that we could sell our part-exchanges to.

We decided maybe we should set up a small community on Facebook. So I went home, set up the page and started inviting a few people we knew. It grew and there were a few hundred, then out of nowhere we hit a thousand and it snowballed from there.’ 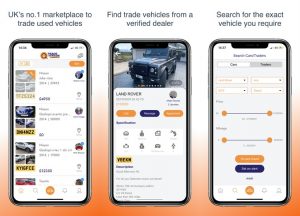 How did the smartphone app come about?

We realised there were some flaws in the business working on Facebook. We were getting around 100 posts a day, so very quickly posts were slipping down the page. We decided to develop an app.

We quickly became aware that it needed to be a different platform to Facebook. We needed uniform adverts, but also it was getting to the point where it was impossible for us to do everything we wanted to do on the page.

We wanted to verify that people were dealing with definite traders. The app allows us to do that as we get everyone who registers to prove they are in the motor trade and gives a little bit of insurance that our users are dealing with bona fide motor traders.

We’re busier than we’ve ever been now, even with the app. I wake up at 6.30am with my kids and I’m approving posts immediately. I wake up to 30 or 40 posts that need to go live. The numbers we’re talking about are amazing. 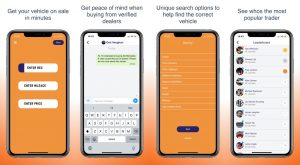 How does the service work?

You sign up for the month for free and you can cancel any time in that month, and then you’re ready to go.

We’re linked into the DVLA search, so you pop in a registration number, it will then populate all of the details of the car, how many owners the car has had. Then you can add a description and up to 100 pictures of the car and a video.

Then it goes to the app and exclusive members get priority over all of the listings. Then the adverts will be populated to Facebook in 30 to 40 minutes.

The best thing is you get paid straight away. There’s no sending it to auction and waiting so many days.

We’ve committed to reinvesting all of the money the app makes into making it better. We listen to what our members say and if we think it’s a viable addition then it goes onto the next version.’

One of the biggest problems we have is that stock sells within seconds and people complain that they’re just not quick enough to buy what they want.

One customer even posted a picture of himself in the bath – top half obviously – and said ‘I can’t believe I’ve just sold five cars sitting in the bath, having a glass of wine!’