Home > News > There’s even a Roller on board stricken vessel

There’s even a Roller on board stricken vessel 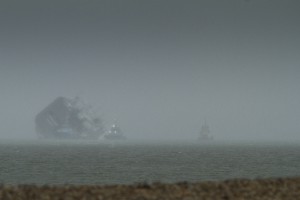 THIS is the stricken cargo vessel Hoegh Osaka off the south coast this morning.

Car Dealer photographer John Fleetwood braved this morning’s dreadful traffic and lashing rain (don’t feel too sorry for him – the carrier is floating only a few hundred metres from Car Dealer Towers) to take the snap.

It is now known there are 1,400 cars and more than 100 pieces of construction equipment on board the vessel, which is still listing at 52 degrees.

Jaguar Land Rover has confirmed it has about 1,200 on board, there are 65 Minis, and Rolls-Royce has told Car Dealer it has a Wraith there, too. A spokesman for JCB said there were 105 of its machines on board, destined for dealers in the Middle East.

The cost of the cargo will run into many millions of pounds.

Yesterday, the vessel worked itself loose from the sandbank in high tide, which forced salvers Svitzer to tow it to rest two miles south-west of Lee-on-the-Solent.

A local council leader today said he was ‘terrified’ there would be an oil spill, threatening a local nature reserve although a marine expert said there were ‘no concerns about any spill’. Anyone think there’s an election looming?

MORE: New-car registrations ‘will slow in 2015’

MORE: Skoda Fabia is What Car? car of the Year