Thousands of vehicles are failing MOT tests every day due to avoidable faults and dodgy DIY fixes, new research has found.

Nearly 32 per cent of vehicles fail MOT tests first time government data shows, many of which could be avoided if drivers carried out basic checks beforehand says BookMyGarage.com.

It asked its network of over 9,000 franchise and independent garages for the single most easily avoided MOT fault, with a third of garages responding with empty screen wash reservoirs as an all-too-common cause of MOT failure, despite the consumable item being designed to be easily refilled by drivers.

A further third stated that failed light bulbs were often the single cause of a vehicle failing. Bulbs are the most common cause of MOT failure, with 27 per cent1 of all defects falling within the category of ‘lamps, reflectors and electrical equipment’.

Some 17 per cent of workshops said cars had failed simply because of the presence of objects obstructing the driver’s view – namely phone holders, sat navs and air fresheners.

Meanwhile, a further 13 per cent said under-inflated tyres were commonly sighted, though this results in a minor defect rather than a failure.

Many MOT failures were caused by cost-cutting DIY measures taken by motorists. 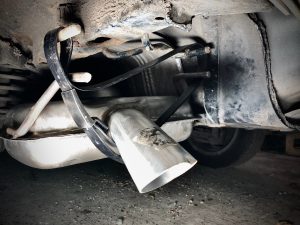 These included instances of both duct table and sellotape being used to patch up windscreen cracks, or suspension components being held together with cable ties and bungee cord. On one occasion, an exhaust was being supported by a leather belt.

The government’s six-month extension introduced during the first national lockdown led to a deluge of MOTs tests in recent months. The second lockdown in England didn’t warrant another extension, though – as reported by Car Dealer.

Jessica Potts, head of marketing at BookMyGarage.com, said: ‘With the MOT extension in place until August 1 this year, we expect high demand for MOT bookings to continue until February. Therefore, some drivers may find it harder than normal to get a re-test should their vehicle fail first time. However, by doing some basic checks, many drivers could avoid the need to book a re-test in the first place.

‘Our analysis also revealed some fairly alarming findings by workshops where owners had either tried to cut corners or save money by attempting repairs themselves.

‘More often than not, any repairs that go beyond the scope of basic checks and maintenance are best left to the experts, especially if getting it wrong could compromise safety or result in thousands of pounds worth of damage.’

Drivers have been urged to get their cars MOT tested and serviced as normal despite garages being busy.

Stuart James, chief executive of the Independent Garages Association, recently told Car Dealer garages are working more efficiently and in some cases longer hours to get through the back-log of MOTs and the usual influx of tests.