THE New York Motor Show is rapidly becoming major event in the automotive calendar with its fair share of important model releases over the past few years.

And 2014 is no exception with arguably Jaguar Land Rover leading the way. Car Dealer managing director James Baggott is currently out in the Big Apple and will be bringing you all the latest news in the next edition of the magazine – but in the meantime, what is there to whet the appetites of dealers in the UK?

Here are our top five cars you should be taking notice of.

JLR has a habit of producing stars of motor shows, and the Discovery Concept was no exception – it stole the limelight at the New York show. It offers a glimpse of a ‘family’ of Discos in the future and debuts Land Rover’s new technology – a ‘see-through’ bonnet. 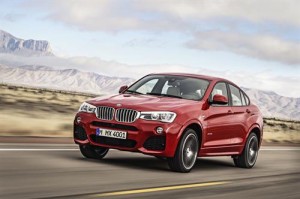 BMW didn’t hold back in New York. The show saw debuts from the M4 Convertible and X4 SUV. The new drop-top Bimmer has the same 425bhp 3.0-litre twin-turbo six-cylinder engine as found in the M3 saloon and M4 Coupe. Prices will start at £60,730 – a £4,077 premium over the M4 Coupe. Meanwhile the X4 is, quite simply, a smaller X6. It’s based on the X3 and will have a range of diesel engines only when it arrives in July priced from £36,590.

This compact SUV may look a bit Fisher Price – and that’s because it is. With chunky panels and plastic trim, it’s not the best-looking model the firm has released in recent years.

Ford was quite understandably making a big noise about its Mustang at the show and used the event to show off a special 50th anniversary model. It has a number of styling cues which nod towards the 1964 Mustang and comes in a retro colour shade – ‘Wimbledon White’. Only 1,964 will be made.

This year marks the 25th anniversary of the people’s champion, the Mazda MX-5. At the New York show, the manufacturer had collected a wide and varied range of the popular model together, including some very rare examples.

For those who like order in their lives and their pens kept perpendicular on their desks, the Mitsubishi stand was a worry. Covered in white cars, a rogue bronze model stood out like a sore thumb. We were not impressed by this chaos.

First it was the new Qashqai, then the refreshed Juke and all-new X-Trail and now it’s the Murano. Nissan is spending a large amount of time and effort in reinvigorating its SUV line-up and the range-topping Murano was Nissan’s star at the show. It continues the model’s traditional trait of extrovert styling. It’s likely to be coming to the UK too with hybrid power and a price tag of £35k.

Obviously being an American show, the US manufacturers like to go big in New York – and GM didn’t disappoint with a huge hall all to itself. These classic Chevrolet models were on display in the walkway on the way to the manufacturer’s showcase.

Up until recently, Kia’s bold models such as Cee’d, Rio, Sportage and Optima contrasted dreadfully with the boxy and unspiring Sedona MPV. Kia UK quietly axed that car a while back and although a brand new version was shown off at New York, it’s very unlikely to be coming to these shores. It’s a shame because it’s probably the best-looking large MPV we’ve ever seen and shows Peter Schreyer’s designs work on anything from a Picanto right up to this leviathan.

By James Baggott and James Batchelor