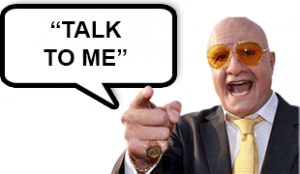 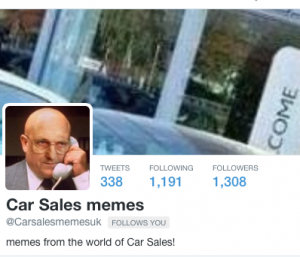 Car Dealer is a big fan of Twitter. But you probably knew that already. However, during our recent idle browsing we stumbled across a quite brilliant car dealer themed account – and we just had to share it.

Car Sales Memes UK uses the power of a picture and a witty caption to brilliantly sum up life working in a dealership. We’re unsure who is behind the account, but whoever it is we salute you – because some of the tweets are pure genius.

Granted, several of them couldn’t be reproduced on a family-friendly website such as ours. However, that doesn’t stop the more inquisitive among you to take a trip over to Twitter to check them all out.

We’ve been laughing out loud regularly at their Twitter output and thought it was about time their hard work was celebrated here. In no particular order, here are our Top 10 Car Dealer Memes.

1. The Just Been Turned Down For Credit One

That was a lie pic.twitter.com/4yxqUemTut

2. The Understanding Finance One

3. The Pat Sharpe Appreciation Society One

4. The I’ve Got To Work The Weekend One

What you up to tomorrow? ‘Working, I’m working’ pic.twitter.com/nlzPdgbnVi

5. The Choke A Dozen Donkeys On That One

6. The Storage Facility One

7. The Be Back Bus Stop One

Old Chinese proverb I was told when I first started in the trade…. pic.twitter.com/TOvQapGhtx

9. The Monday Morning Feeling One

As we said, pure genius. If you’ve spotted something that has made you chuckle online, share it with the @CarDealerMag team.

Life’s too short to take things seriously all the time…