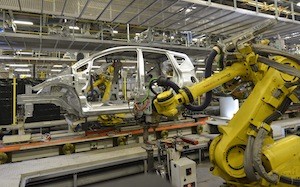 UK car production down in August

The SMMT says that this fall led to some manufacturers taking additional holiday shutdown.

Mike Hawes, SMMT chief executive, said: ‘The month of August – typically the quietest of the year – saw a 22.1 per cent drop in car production over 2013 as the 2014 calendar meant some key plants took additional shutdown compared to last year.

‘Volumes are still strong for the year-to-date, however, with the UK automotive sector in the midst of a renaissance. Global demand for quality UK-built products is at an unprecedented level, with significant investments into UK production facilities from government and industry currently being realised.’