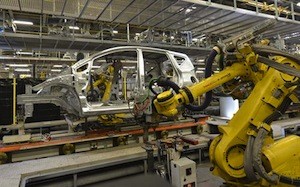 UK set to smash 1.5m cars made this year

The total output of vehicles built in the UK this year is set to pass 1.5m units for the time in six years, and SMMT has increased its new car forecast from 2.22m to 2.25m units following a four per cent increase in the October market.

Mike Hawes, SMMT chief executive, said: ‘With output up 4.5 per cent in 2013 year-to-date, UK car manufacturing is on track to pass 1.5m units this year, the best performance since 2007.

‘A number of mass-market manufacturers have this year used November to prepare their production lines for new models, so volumes dropped 3.6 per cent in the month. However, the forthcoming new models will play an integral part in what is predicted to be an even stronger 2014 for UK car manufacturing.’

Hawes added: ‘Ongoing weak European demand and changes to UK manufacturing operations impacted commercial vehicle production in November. While we expect the downward trend to continue for a few months yet, CV manufacturing in the UK has a solid base from which to build with more than 200 vans, trucks and buses rolling off domestic production lines every day.’

John Leech, KPMG’s UK head of automotive comments: ‘The industry is in confident mood as its key export market, the EU, continues to recover, posting its third straight monthly sales increase. Most analysts are now forecasting EU car sales will grow in 2014, reversing six-straight years of falls. The UK market is also expected to grow next year by approximately five percent but not as quickly as in 2013. This reflects the fact that the UK market is almost back to its long-run sales average.’