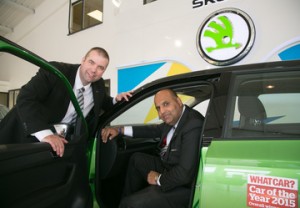 VERTU Motors has added the first Škoda dealership to its portfolio with the acquisition of MSB Škoda in Darlington.

Vertu Motors, based in Gateshead and the UK’s sixth-largest motor retailer – and the parent company of Bristol Street Motors – has bought the business on McMullen Road for £1.5m.

The acquisition brings the total number of sales outlets operated by Vertu to 117 and increases its north-east outlets to 18.

Robert Forrester, CEO of Vertu Motors, said: ‘It is great news that we have added Škoda to our group. We are continuing to develop by adding to existing franchise relationships as well as exploring new manufacturer partners. This acquisition will enable us to generate further profitable growth for our shareholders and wider choice to our customers.

“Vertu Motors is proud to have its central support centre in the north east and to grow its dealership base in the region. This is a vibrant region with a growing economy and one we are delighted to be a part of.’

MORE: What a day! #CDX15 hailed a huge success with more than 1,500 people flocking to Silverstone

MORE: Benfield delighted to be ranked among ‘the largest private companies in the land’

On superunleaded.com – Say Hello To The World’s Coolest Campervans