Appearing on the BBC speaking live from a showroom in Peterlee, Forrester told the show that selling cars will be changing for the foreseeable future.

He explained the measures Vertu has put in place in its showrooms across the UK and said it included temperature checking all staff.

The interview follows news yesterday that car dealers will be allowed to reopen next Monday (June 1) after the prime minister said the lockdown easing will move into phase two.

Forrester said: ‘There will be a number of differences. Showrooms have one-way systems, hand sanitising, there will be people with masks and we have perspex screens to protect customers and colleagues.

‘The other difference is of all the colleagues, when they arrive, have their temperatures checked before they start work – I have had my temperature checked this morning.’

Forrester also explained that customers will have to get used to taking a test drive on their own – something that is allowed with the use of trade plates after the DVLA changed the rules.

Social distancing is impossible in a car so dealerships are having to get used to setting up customers for test drives on their own – some are using new technology to help ease the process.

Forrester said: ‘I think one of the major differences in terms of car retailing is that when you go for a test drive – and many people want to test drive before they buy a car – then the sales executive will not be in the car with you.

‘It will be quite a major change for customers.

‘There is a fairly obvious potential risk, but I think we trust the vast majority of our customers to do the right thing, do the right routes and come back, but clearly it changes how we sell cars.’ 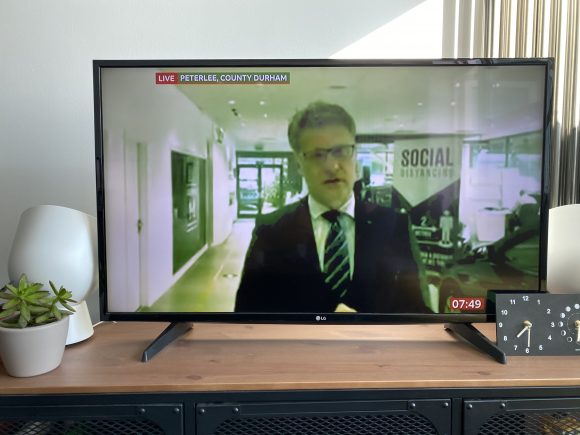 The Vertu CEO also explained that the group had sold cars during the lockdown and that internet sales and enquiries are rising.

He added: ‘People are doing far more on the internet and our online sales have gone up quite considerably.

‘We sold 650 cars last week as a group without a single test drive and not one person coming into a showroom.’

Asked by the BBC presenter if he was confident he could clean and sanitise the cars in between each customer viewing, Forrester said ‘absolutely’ he was.

He added: ‘These cars will be locked so a customer will have to find a colleague, we will open it and lock it when they are finished and then sanitise the car.

‘It is exactly the same with courtesy cars, and used cars on our outdoors forecourts – we have got the protocols in place and we have done the risk assessments and the whole industry has been involved  with BEIS and the trade bodies to make sure we are ready for next Monday.’

Forrester also said he believed there was some pent up demand in the market and that there will be some great deals on cars too.

He told BBC Breakfast: ‘We have seen sales since the lockdown and it’s been gradually rising. Web enquiries have been going up continually through the lockdown and I think there is a pent up demand for cars, certainly with some people nervous about public transport so are looking to buy cars.

‘We have to assess that over the next few weeks. I think the market will be there, the manufacturers particularly want the factories running and want the retailers open – and I think there will be some fantastic deals as we try to get the machinery of one of the largest industries up and running.’

Watch our Car Dealer Live interview with Robert Forrester below: