Video: There are dealers and then there’s supercar specialist Tom Hartley

by John Bowman
in News

He’s instantly recognisable as the owner of a business that deals in jaw-dropping luxury, performance and classic cars.

He was a self-educated, self-made millionaire at 17, lost everything at 19, then built it all back up again.

His clientele includes superstars from across the sport and entertainment spectrum.

His stock is paid for, not financed or mortgaged.

And yesterday he was our guest on Car Dealer Live.

Who are we talking about? Tom Hartley, of course!

His eponymous dealership – based on a sprawling 45-acre estate in Overseal, Derbyshire, where he also lives – currently has in its inventory cars such as a 2011 Bugatti Veyron Supersport (yours for £2.22m) plus a Ferrari 488 Pista Piloto (please ask).

The 59-year-old – who sold his first car aged 12 and has just published his autobiography The Dealmaker – chatted with Car Dealer founder James Baggott on a wide variety of topics across his long career.

While building up his business, a favourable exchange rate and big discounts meant he was able to sell European imports to franchised dealers cheaper than they could buy them from the manufacturers.

This made him rich – but also unpopular within the industry, and, as he said, ‘they all ganged up on me’, and with the advent of type approval his business failed, not helped by an eye disease that necessitated surgery.

He had the last laugh, though, gradually and patiently building everything up again.

A new showroom costing several million pounds was launched 12 months ago with specifications the like of which won’t be seen anywhere else for a number of years, he said.

Was it a competitive world that Hartley operated in or was there a community feel, Baggott wanted to know.

Saying that he respected rivals in the business, Hartley stated: ‘I’m sorry, no disrespect … There are other dealers and there’s Tom Hartley.’

A typical day starts at 6.30am, making a cup of coffee for his wife and himself, checking emails at 7am then straight into the showroom at 8am to await the sales manager and go through the plan for the day.

Mind you, when we chatted to Tom, he’d been emailing the Far East at 4am.

And as he told Baggott, there’s no real structure otherwise – he had no idea where he might be or what he might be doing at 2pm or 3pm.

‘Whatever presents itself in the world or the country that needs me to be there to do the deal, that’s where I’ll be,’ he said.

Nor had he really been affected by lockdown, helped by the location, as opposed to dealerships on town and city sites.

Hartley said theirs had been the only dealership that had remained open – and had probably sold more cars in the past six weeks than it had at any other time.

So, what sort of cars has the dealership shifted during lockdown? Among them, Hartley rattled off Ferrari F50s, McLaren P1s, Lamborghini SVJs and Lamborghini Aventadors, plus Porsche 918s, averaging eight or nine cars a week.

And just what is his ethos that drives him on after 47 years in the business?

He said: ‘I get up every morning like I’ve never bought or sold a car and I’ve got no money in the bank.

‘It’s just the way I am, just the drive I’ve got and the energy I’ve got. I’ll probably go to bed one day and I probably won’t have that energy, and until that day happens I’ll keep doing what I’m doing the way I do it.’

He dismissed criticism that sons Carl and Tom, both now successes as well, were born with a silver spoon in their mouth.

‘That’s certainly not the case. They were born with an opportunity and they took advantage of the opportunity. It’s as simple as that,’ he said.

Moving on to the wider business community and those he respected, Hartley said he liked people who got the job done, naming in particular Sir Philip Green, Sir Richard Branson, Lord Sugar and Simon Cowell, although he added that he’d never want to be in a position where he was answerable to a board.

When it comes to the fame game as regards customers – Sir Elton John being among them – Hartley commented: ‘We have more people arrive by helicopter than they actually do by car, which is quite unique about the estate – we guarantee them the privacy, the one-to-one.’ 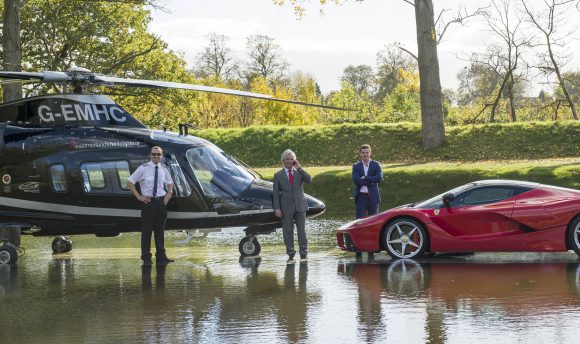 No particular deal stuck out in his mind as the most memorable one, though.

He said: ‘They’re a deal. That’s why I’m the dealmaker. The one I sold yesterday I’ve forgotten about already.

‘I’m sorry. I’m moving on. I never look behind. I don’t want to avoid that question, please understand me. That’s my motivation. When I’ve done the deal, I’m moving on. You’re only as good as your last deal.’

But is it cars that motivate him or money? ‘That’s a good question. As an entrepreneur, I love earning money. That would be my answer to that question. I’m driven by money, but cars has been the asset that’s driven me to that.’

And he revealed that his two key words in business were ‘flexible’ and ‘focus’.

Baggott wanted to know what was happening with supercar prices at the moment, mentioning the knockdown price that a McLaren went for in April, as reported by Car Dealer.

Was that an anomaly? Hartley replied that he believed it was his dealership that basically set the price for the McLaren market at the moment, using the Hartley business model of setting prices where they felt the market was, judging income for demand and outgoing for selling, arriving at where they thought the prices should be. 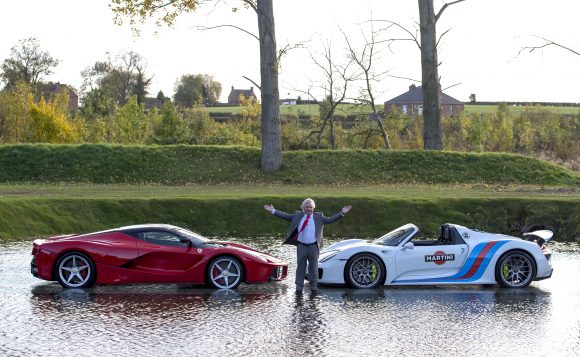 And he added: ‘It’s a good time to buy McLarens now. I think McLarens just now are probably representing the best value for money for buying a supercar than any other car in the world.’

How about classic cars versus modern cars? What was Hartley’s preference, wondered Baggott.

‘It’s modern cars for me … I don’t enjoy driving classic cars. I tend to drive, believe it or not, a Volkswagen Golf diesel as a runaround – it makes me not be complacent with the supercars that we sell.’

Going to a special occasion, though, and Ferrari is top of the list. But for total satisfaction as regards luxury cars, Rolls-Royce is king in Hartley’s mind.

He agreed that the coronavirus crisis would change things, but said that he’d been through four recessions and added: ‘I’ve never been more excited about where we are now in the business than any part of my life.’

He commiserated with those dealerships that had been locked down, but said that his dealership had demonstrated just what could be done with the situation.

‘As I said to you, I’ve never been more excited, because there are opportunities out there.’