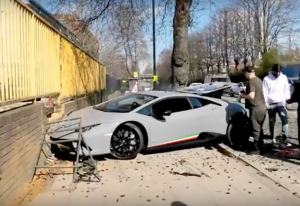 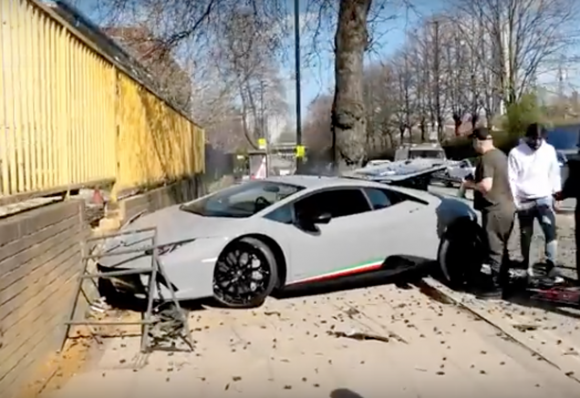 A £200,000 Lamborghini careered off the road yesterday after attending a supercar event organised by the HR Owen dealership group.

The Huracan Performante was leaving the meet when it spun out of control, veered off the road and ended up badly damaged – possibly written off – after hitting a tree and wall.

Thomas Melsens, 26, was doing video work at the time for his ‘Supercars on the Street’ YouTube channel.

He told the London Evening Standard newspaper: ‘Visibility was good but the road was dusty – that might be why the driver lost control. It’s fortunate no-one was hurt. I can’t imagine them being able to repair the car.’

Online, Melsens said: ‘Luckily nobody was injured. The driver is OK but it is sad to see this Performante with serious damage.’

The car, capable of hitting 60mph in around three seconds, had been taking part in a ‘Supercar Sunday’ event organised by HR Owen in North Acton, London.

The group has showrooms across England and is one of the leading sportscar dealers in the UK, specialising in marques such as Bugatti, Ferrari, Aston Martin – and Lamborghini.

The company previewed the event last week on its Twitter feed, saying: ‘Who’s excited for #HROSupercarSunday this weekend?! We can’t wait to see all of your photos of the stunning car collection!’

And today, an HR Owen spokesman said: ‘We were concerned to hear about the accident which happened to the car on its way home after it had left the event.

‘HR Owen takes safety extremely seriously and puts in place every possible precaution, with the event itself on Sunday being fully risk assessed and coordinated with the police.’

MORE: Up to 50 new jobs to be created by Startline Motor Finance