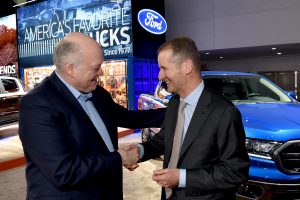 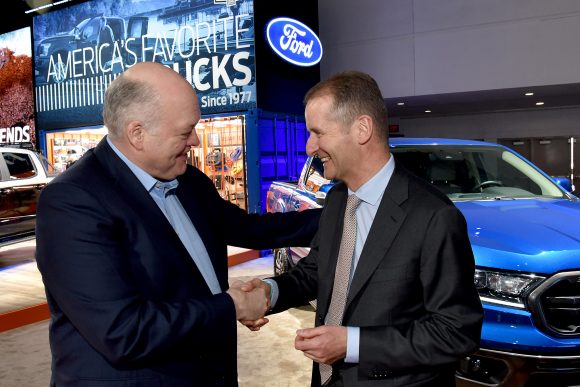 The manufacturers say the move will also better serve customers in an era of rapid change in the industry.

Making the announcement at the North American International Auto Show in Detroit, Volkswagen chief executive Herbert Diess, pictured right, and his Ford counterpart Jim Hackett, left, confirmed that the companies intended to develop commercial vans and medium-sized pick-ups for global markets starting as early as 2022. They said the alliance would drive significant scale and efficiencies and estimated that it would yield improved annual pre-tax operating results, starting in 2023.

In addition, Volkswagen and Ford have signed a memorandum of understanding to investigate collaborating on autonomous vehicles, mobility services and electric vehicles and have started to explore opportunities. Both companies also said they were open to considering additional vehicle programmes. The teams will continue working through details in the coming months.

Hackett said: ‘Over time, this alliance will help both companies create value and meet the needs of our customers and society.

‘It will not only drive significant efficiencies and help both companies improve their fitness, but also gives us the opportunity to collaborate on shaping the next era of mobility.’

Diess added: ‘Volkswagen and Ford will harness our collective resources, innovation capabilities and complementary market positions to even better serve millions of customers around the world. At the same time, the alliance will be a cornerstone for our drive to improve competitiveness.’

The alliance, which does not entail cross-ownership between the two companies, will be governed by a joint committee to be led by Hackett and Diess and include senior executives from both companies.

Ford and Volkswagen both have strong commercial van and pick-up businesses around the globe, with popular nameplates such as the Ford Transit family and Ranger as well as the Volkswagen Transporter, Caddy and Amarok.

Demand for both medium pick-ups and commercial vans is expected to grow globally in the next five years. The alliance will enable the companies to share development costs, improve their respective manufacturing capacities, boost the capability and competitiveness of their vehicles and deliver cost-efficiencies while still maintaining distinct brand characteristics.